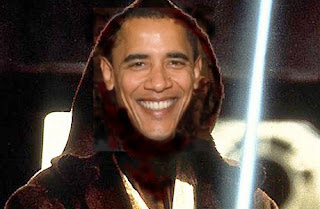 ...One of Obama's TV ads, set to rock 'n' roll, has a Woodstock feel to it. Text alternating with crowd scenes reads: "We Can Change The World" and "We Can Save The Planet."

Those are some kind of campaign promises. The kind no mortal could possibly keep, but never mind. Obi-Wan Obama is about hope -- and hope, he'll tell you, knows no limits.

It is thus no surprise that the young are enamored of Obama. He's a rock star. A telegenic, ultra-bright redeemer fluent in the planetary language of a cosmic generation. The force is with him.

But underpinning that popularity is something that transcends mere policy or politics. It is hunger, and that hunger is clearly spiritual. Human beings seem to have a yearning for the transcendent -- hence thousands of years of religion -- but we have lately shied away from traditional approaches and old gods.

Thus, in post-Judeo-Christian America, the sports club is the new church. Global warming is the new religion. Vegetarianism is the new sacrament. Hooking up, the new prayer. Talk therapy, the new witnessing. Tattooing and piercing, the new sacred symbols and rituals.

And apparently, Barack Obama is the new messiah..

Read the entirety of Kathleen Parker's potent column here.
Posted by DH at 2:46 AM