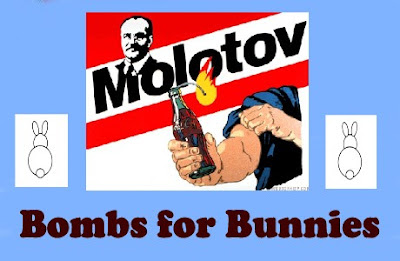 It is no big surprise that a few "animal rights" extremists are actually anti-people too. And not just in general principles of land use, population control, opposition to vivisection, and so forth. But actually anti-people -- as in firebombs set at the homes of scientific researchers!

A judge noted this violent tendency and issued a temporary restraining order yesterday against animal rights groups and specific terrorists involved with them who have been accused of threatening UCLA employees and students because they conduct research using animals.

...The order by Superior Court Judge Gerald Rosenberg forbids the activists from engaging in acts of harassment and threats of violence, and requires that they stay away from anybody who is known to be a university employee involved in animal research, UCLA's attorney John C. Hueston said. It also ordered the activists and their groups to remove the researchers' personal information from Web sites that name them as targets of their protest...

Three times since June 2006, Molotov cocktail-type devices have been left near the homes of faculty members who oversee or participate in research that involves animals, according to the university.

Researchers' homes have been vandalized and they have received threatening phone calls and e-mails. On at least one occasion a faculty member received a package rigged with razor blades, UCLA said in a statement.

"Enough is enough," UCLA Chancellor Gene Block said. "We're not willing to wait until somebody is injured before taking legal action to protect our faculty and administrators from terrorist tactics, violence and harassment."

The University of California's Board of Regents also sought permanent injunctions against the Animal Liberation Front, the Animal Liberation Brigade, the UCLA Primate Freedom Project and five protesters believed to be affiliated with those groups. The lawsuit alleges that the defendants invaded researchers' privacy, interfered with business practices and intentionally caused emotional distress.

Jerry Vlasak, a spokesman for the Animal Liberation Press Office, had earlier said underground protesters would not be moved by the lawsuit. "Here they are risking 30-year sentences for arson and they're going to be threatened by a restraining order? It doesn't make sense to me," he said. "I would be laughing out loud."...
Posted by DH at 3:04 AM