The Mendacity of the New York Times: Here We Go Again! 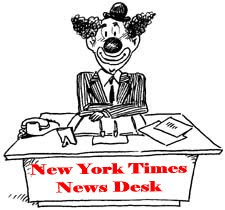 The desperate smear of Senator John McCain attempted by the New York Times is now being examined by folks with far more journalistic integrity and skill than those reporters scribbling screeds over at the Gray Rag or pontificating for the television networks.

Below is a small sample which will help you sift through the hokum.

* "Fit to Print? New York Times in Crosshairs for Report on McCain and Female Lobbyist" from Mosheh Oinounou and others on the Fox News staff;

* "John McCain: Finally A Republican Again -- to the Media!" by Mac Johnson over at Human Events;

* "The Iseman Cometh" by James Taranto at WSJ's Best of the Web;

* "Yellow Journalism at the Times" by Jay Ambrose of the Scripps Howard News Service;

* And the most influential piece, The New Republic's "The Long Run-Up: Behind the Bombshell in 'The New York Times'" by Gabriel Sherman.
Posted by DH at 2:40 AM