The Profanity of the Opera: Protesting Jerry Springer 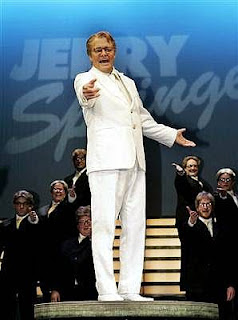 "Jerry Springer the Opera" easily qualifies as one of the worst blasphemies ever to make the public stage. And now the heretofore honored stage to be desecrated by this lewd production is none other than Carnegie Hall.

Just what will playgoers see featured in this "entertainment" package on January 29th and 30th?

* The crucifixion of Jesus is mocked as are many Christian religious rites.

* Jesus is introduced as “the hypocrite son of the fascist tyrant on high.” He wears a diaper, is fat and effeminate and says: “Actually, I am a bit gay.”

* Nudity abounds in a profanity-laced production where nothing is sacred.

* Eve gropes Jesus in a manner too indecent to describe while the Annunciation is described as a rape.

* God is a fat man in a white suit who complains about being blamed for everyone’s problems. He invites Jerry Springer to join Him to “sit in Heaven beside me, hold my hand and guide me.” At the end, Jerry emerges as the true savior of mankind.

The American Society for the Defense of Tradition, Family and Property (TFP) has, quite rightly, organized a public protest of this indecent production and those of you living in the NYC area are invited to participate. However, the rest of us can act too by spreading the word about this grossly offensive "musical" and signing this online petition today to be sent to Carnegie Hall officials.

For more, if you can stand some of the offensive language used in the play, here's another account. And here is a Vital Signs Blog post from a couple of years ago about the London production with a link to Ian Cooper's review of the same.
Posted by DH at 11:37 AM