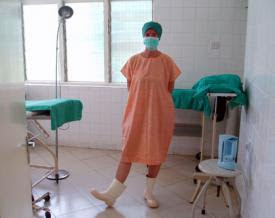 This past Tuesday marked the 35th anniversary of Roe v. Wade. Since that fateful decision, over 48.5 million children have perished at the hands of abortionists. One out of every four children conceived in America will be killed by an abortionist. In 2003 alone, more children died from abortion than the total number of Americans who died in the Revolutionary War, Civil War, World War I, World War II, Korean War, Vietnam War, and Gulf War combined. Two-thirds of all abortions are performed on single women. Statistically, the womb has become the most dangerous place in America.

This war against unborn children has been waged by white-coated mercenaries who are paid to carry out surgical strikes against defenseless human targets. Their techniques are effective—1.21 million casualties in 2005. Not content to merely wage war against the unborn in the operating room, however, the abortion industry has expanded the theater of action. Chemical warfare is now waged against the unborn. RU-486, the abortion pill, is hailed as a "quick and easy" chemical-induced abortion. With FDA approval of the deadly drug in 2000, the casualty count from "killing through chemistry" can be expected to grow.

In Roe v. Wade, the Supreme Court adopted a disposable-man ethic. The Court decided that the taking of an unborn child's life was a matter of "choice" to be determined by the needs and desires of others. This disposable view of human life has adversely affected our culture on many levels. Beyond the millions of unborn babies who have been killed, the last 35 years have led our culture to accept the idea of killing the elderly and handicapped. What is the justification for such heinous acts? Their quality of life didn't measure up to someone else's subjective standard of perfection and they had become "inconvenient." And no doubt, they would have wanted us to end their lives anyway.

The disposable man ethic has also negatively impacted the frontier of science. We now take lightly the destruction of millions of human embryos in the hope that we might possibly find a cure for some diseases. What is the justification for this experimentation? Pure utilitarianism. By killing these tiny embryonic human beings, we offer hope for larger ones. In the process, we have adopted the notion that it is acceptable to sacrifice some members of the human family in the hope that, by their deaths, we might save others or at least improve their quality of life. Of course, those being sacrificed have no choice in the matter...

History will not look kindly upon our cruelty toward the unborn. Theologian and author Francis Schaffer rightly noted in his book, Whatever Happened to the Human Race, that the character of a society will be judged by the way it treats its most vulnerable members. Sadly, the history of the destruction of our unborn children is a stain on America’s character that will not go away.

Ken Connor, the lawyer who represented Governor Jeb Bush in the Terri Schiavo case, is the Chairman of the Center for a Just Society and a Town Hall columnist. This column, marking the 35 years of legalized (yet still barbaric) practice of abortion, is one of his most most compelling.
Posted by DH at 11:53 AM