What If We Held A Presidential Election And No One (Of Substance) Ran? 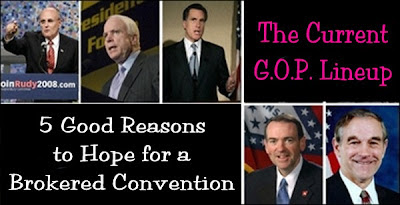 What on earth has the Republican Party gotten itself into?

Adam Graham gives as good a wrap-up of the G.O.P.'s paltry platoon of presidential candidates as I've seen yet in "The Evil of Five Lessers" over on NewsByUs. To make sure you don't miss it, I print it here in its entirety...almost.

Rarely has our Republican Party faced a choice as difficult as the one we face in the current presidential nomination process. The five men running for President are horribly flawed. From these five, Republicans must choose a nominee.

The media-designated front-runner is John McCain. Senator McCain is a hero of great distinction in the military. For the first 14 years of his Congressional Career, he was a rock solid Conservative. Since then, John McCain has championed the monstrous campaign finance reform bill, favors taxpayer financing of unethical embryonic stem cell research, has called those of us who oppose his amnesty plan bigots, has proposed onerous environmental regulations that would wreck our economy, and opposed giving tax cuts to the American people.

He supports creating a racialized Native Hawaiian Government, which would undermine not only US sovereignty, but US unity. He has been in support of the International Criminal Court and the Law of the Sea Treaty. In essence, combined with his stance on open borders, McCain is one of the worst opponents of American sovereignty that exist within our borders.

At the same time, the one-time frontrunner Rudy Giuliani is unacceptable due to his pro-abortion stance that is to the left of the mainstream of the Republican Party. The three-time nominee of New York’s Liberal Party insists he helped bring down abortions and encourage adoptions, but a study of his statements as mayor found no evidence to back that up. Abortion rates went down nationally due to the hard work of pro-life workers, with little help from pro-abortion politicos. Rudy might as well take credit for the Yankees’ 4 World Championships, he had as much to do with them as he did the falling abortion rate.

Ron Paul, if we’re honest, represents the most consistently conservative economic views in the race with a proud record of opposing taxes. Unlike other candidates, Ron Paul gives a hoot about what the Founding Fathers have written. Glenn Beck says that Paul is the closest thing we have to a Founding Father in this race and he’s right as far as ideology goes. In terms of wisdom, not so much. If Paul is to be believed, for years, racist and anti-Semitic material was published under his name and he did nothing to stop it. Paul, also having been given an amazing war chest, has shown that raising money does you no good, if you have no clue how to manage it. The level of Paul’s naivette on foreign policy is an issue that you could write reams on. Paul might make an interesting protest candidate, but not a good president.

Then we have Mike Huckabee, who has been vilified beyond measure in the blogosphere. Huckabee is not a fire breathing liberal. While his pardon and clemency record indicates flaws in judgment, his economic and spending records were little worse than those of most Republican governors of his era. Finding a Republican governor elected around that time who reduced government and avoided tax increases is harder than finding Waldo. Huckabee is average, or perhaps above average, for Republican governors in America. Given that most of our Presidents in recent years once served as Governors, perhaps the best way to insure we get a consistent conservative candidate for president is to insist on a consistent conservative governor.

Despite his record, Huckabee has signed a pledge not to increase taxes, he supports the Fair Tax, and has a solid plan to secure the nation’s borders, this plus he’s trustworthy on social conservative issues of concern. Huckabee’s fatal flaw is that at this point, he looks like a man running for the position of John McCain’s Vice-President. Either the Governor doesn’t understand that McCain has a paid staff that’s more than able to respond to Mitt Romney, or his constant defenses of the Senator are a tryout for the Vice-Presidency.

Huckabee may even be able to force the issue with his Southern strategy. He’s set to win several Southern States on the strength of the Evangelical Christian vote, while McCain and Romney will be competing neck and neck in other states. Under this scenario, we’ll get the fantasy of every political junkie: a brokered convention. Except, it will be pretty cut and dried: Huckabee will release delegates to McCain, provided McCain makes him the Vice-President.

Being the Vice-President of a 72 year-old cancer survivor who already looks beyond his years increases your chances of reaching the White House as its less likely the candidate will seek a second term and even possibly not be able to finish his term, allowing Huckabee to, for the second time in his career, ascend to a position he could not have won as an open seat (the first time was when he ascended to the Governorship on the resignation of Jim Guy Tucker.) As I’m not interested in making John McCain president, I’m not interested in Huckabee.

Then there’s Mitt Romney. I’ve written about the flip-flops before. However, the man also has an excellent family and a strong business record. Mitt looks and sounds Presidential. The pity of the campaign is that, quite frankly, you cannot trust him. A video record caught Romney on tape telling fundraisers to “promise anything” to potential donors. While Romney clearly meant in terms of primary victories, the phrase could describe his entire effort.

Every time he hits a must-win state, there’s a new promise. In Michigan, $20 billion a year was promised for automotive and energy research (hope he can do that while fulfilling the promise I heard him make Nevada to hold the growth of spending to Inflation –1%) and in Florida, he promised to do away with the payroll taxes on workers over age 65, thus speeding the decline of Social Security in order to score points with Florida seniors. If Romney’s going to get be the nominee, it better happen soon, before he has to make any more eleven-figure campaign promises that it anyone’s guess as to whether he’ll try and keep them.

In the end, Conservatives face an unenviable choice of our own making. We didn’t pay attention to the process until our best chances for a good choice had gone down the drain. Conservatives must get involved sooner and with a greater level of commitment. We must demand better candidates and then fight for them when they get in...
Posted by DH at 11:02 AM