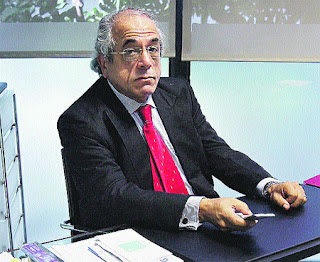 Police arrested at least six people Monday in raids on clinics suspected of carrying out illegal abortions in Spain, officials said. Four facilities in Barcelona were being searched, a Civil Guard official in the city said under rules barring his name from being published.

Spain allows abortion in cases of rape, fetal deformation or danger to a pregnant woman's physical or mental health. In the latter case, this danger must be certified by a doctor other than the one who would carry out the abortion.

The Civil Guard official declined to say exactly what the clinics were suspected of doing illegally...

(Just torturing and killing innocent preborn kids isn't, in itself, a crime nowadays. God help us.)

The photo is of Carlos Morin, a gynecologist who runs the four raided clinics. Morin was featured in a Dutch documentary offering to perform an abortion on a female journalist posing as being nearly seven months pregnant. The film ostensibly created enough pressure on authorities to make the long overdue raids. Morin was among those arrested.
Posted by DH at 2:02 PM