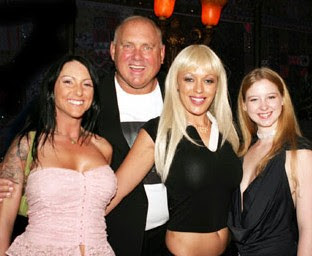 Ron Paul's peculiar strain of libertarianism has garnered him yet another endorsement that will make those Christian conservatives supporting him pretty uneasy...and embarrassed. Maybe enough to start checking out.

Dennis Hof, owner of the Moonlite Bunny Ranch (a legal brothel near Carson City, Nevada), was so impressed after hearing Paul in Reno last week that he decided not only to vote for the fellow but to raise money for him too. (Hof is shown here with some of his...uh...business associates.)

...Hof and two of his prostitutes, Brooke Taylor and a woman who goes by Air Force Amy, attended a Paul news conference. The women say they liked Paul's message, but wanted to learn more about other candidates before making a decision.

Paul spokesman Jeff Greenspan say while Paul does not personally condone prostitution, the candidate does not think it's the role of the federal government to regulate such activity....
Posted by DH at 1:44 PM