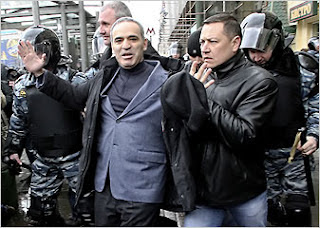 Russian opposition leader and former world chess champion Garry Kasparov failed on Monday in an appeal against his detention during a street protest at the weekend, one of his aides said.

Kasparov was one of dozens arrested in protests in Moscow and St Petersburg that were broken up by riot police using truncheons. The United States and European powers have expressed concern at the police tactics a week before parliamentary polls...

Kremlin officials say the protesters do not have popular support and are dangerous radicals trying to destabilize Russia with help from foreign governments...

Right. As Dostoevsky, Solzhenitsyn, and hundreds of thousands of principled, peaceful advocates of freedom have learned over the decades, the repressive rulers of Russia (be they czars or Communists) always describe appeals for liberty, justice and religious prerogatives to be from "dangerous radicals trying to destabilize Russia with help from foreign governments."

For more on Kasparov, see these Vital Signs Blog posts. And please consider sending off a request to Russia's U.S. ambassador to 1) restore Garry Kasparov to freedom; 2) to require strict fairness in the coming election; and 3) to work to insure freedom and human rights in the "new" Russia. The postal addresses for all 5 consulate offices in the U.S. are at this web page.
Posted by DH at 2:04 PM