What's What With Evangelicalism? 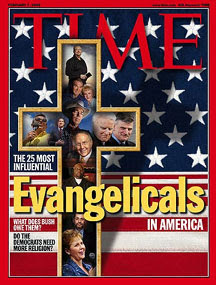 If you're Catholic, Orthodox, Coptic or, for that matter, an evangelical who wonders just what "evangelical" really means in the 21st Century, I'd advise you to read through the symposium put together by Touchstone Magazine featuring very worthwhile comments from 1) Russell D. Moore, author and Dean of the School of Theology and Senior Vice President for Academic Administration at The Southern Baptist Theological Seminary in Louisville, Kentucky; 2) Denny Burk, author and Assistant Professor of New Testament at Criswell College in Dallas, Texas; 3) John R. Franke, Professor of Theology at Biblical Seminary in Hatfield, Pennsylvania; 4) Darryl Hart, author and staff member with the Intercollegiate Studies Institute; 5) Michael Horton, author, editor of Modern Reformation magazine and Professor of Systematic Theology and Apologetics at Westminster Seminary, San Diego; and 6) David Lyle Jeffrey, author and Professor of Literature and the Humanities at Baylor University and Guest Professor of English and Comparative Literature at Peking University.

Really interesting, helpful and challenging stuff. You won't agree with all of it ( I didn't) and you may not like the implications of some of the things they have to say (I didn't), but I'm sure you'll find it all most provocative. And to illustrate it, let me give you just a few quick examples:

Has Evangelicalism lost anything in the process of maturing (if it did)?

Moore: The Evangelical movement has “matured” out of Fundamentalism in some of the worst ways. Yes, Fundamentalism was often narrow, often legalistic, and often tied to an inordinate fear of contamination by the outside culture.

In our flight from Fundamentalism, however, many of us—individuals and churches—have become mired in just what the Fundamentalists warned us we would: worldliness. The carnality in many Evangelical churches is astounding, not just at the obvious level of sensuality, but also at the less obvious (to us, anyway) level of covetousness, love of money, and celebrity worship...

Hart: What seems to have changed markedly among Evangelicals is a willingness to combat doctrinal error. When Evangelicals strove to put together a movement of conservative Protestants around 1950, they were clearly in opposition to liberal Protestantism, secularism, and Roman Catholicism.

The only enemy of those three that remains is secularism. This could be a sign of growing ecumenism among Evangelicals. I take it instead as an indication of theological confusion and the triumph of an impoverished view of tolerance...

Horton: With growing successes in popular culture, Evangelicalism increasingly risks becoming assimilated by it. Obsessed with its own relevance, the movement has shown that it is as capable of surrendering its soul to the mall just as mainline Protestantism has largely offered itself to the academy. Often mixed with a genuine concern for reaching non-Christians, winning respect has become a major motive.

Sociologist Christian Smith has recently described American spirituality as “moralistic, therapeutic deism,” and he says that this fits those raised in Evangelical churches as well as any others. If Fundamentalism reduced sin to sin s (or at least things they considered vices), contemporary Evangelicals seem to have reduced sin to dysfunction. In this context, Jesus is not the savior from the curse of the law, but a life coach who leads us to a better self, better marriages, and happier kids...

Are there any fundamental differences within the Evangelical movement today, and do you think they will deepen into permanent divisions, or even have already? How might they be healed?

Moore:...There are serious problems in Evangelical Christianity today, including some things I would reject as outright heresy: pluralism and feminism and the rejection of God’s knowledge of the future, for example. The best way to deal with these issues is not, however, in more Evangelical manifestoes but in strong, healthy, disciplined, evangelistic churches—Baptist, Methodist, Pentecostal, non-denominational, and so forth.

Burk: The differences are too many and too complex to enumerate here, but we would do well to mention some that have been in the foreground of discussion.

The Emergent Village wing of the emerging church has been chipping away at the theological and moral foundation of the Evangelical movement. For instance, “Evangelicals” such as Brian McLaren have called for an Evangelical moratorium on calling homosexuality sin. Steve Chalke has suggested that the penal substitutionary view of Christ’s atonement is a form of “cosmic child abuse.”

Open theism has been embraced by many Evangelicals who insist that God cannot know the future choices of his free creatures. This particular teaching has thrown classical notions of the doctrine of God into disarray.

We might also mention that nearly every feature of my definition of Evangelicalism is to some extent a matter of dispute within the movement. At Fuller Seminary, for instance, the issue of inerrancy divided the faculty before being jettisoned as an essential Evangelical doctrine. Some Evangelicals are openly speculating whether it is necessary for a sinner to have explicit faith in Jesus Christ in order to be saved.

One, for instance, suggested in 2004 in the Journal of the Evangelical Theological Society that there is a “reformed” version of inclusivism that may very well find support in Scripture. This kind of thinking calls into question the necessity of conversion and the urgency of evangelism and missions, all of which have been hallmarks of the Evangelical movement.

All of these are fundamental issues that beg the question of what Evangelicalism’s confessional boundaries are. The only way to heal the breaches is for Evangelicals to find their unity in the truth of the gospel, just as Jesus prayed (John 17:13–21). Yet agreeing upon the center of this “truth” is precisely what has eluded the Evangelical movement...

Hart:...Arguably the greatest tension within Evangelicalism currently concerns the movement’s relationship to electoral politics. The older generation of Evangelical spokesmen, Jerry Falwell, Pat Robertson, and James Dobson, is gradually being replaced (informally and mainly through the mainstream media) by a younger generation, including people like Rick Warren, Bill Hybels, and Jim Wallis.

The younger (though hardly youthful) Evangelical leaders are reluctant to participate in the culture wars and have embraced causes fairly distinct from those that defined the Religious Right. A Left-Right political struggle could well be the next fault-line within Evangelicalism.

Horton: At its best, Evangelicalism early on (in Britain and North America) offered a united witness for what C. S. Lewis called “mere Christianity.”

As Lewis observed, no one can live in this hallway. Christians are nurtured in particular rooms (i.e., traditions), but they come into the hallway for fellowship and common witness. The problem, of course, is that the rooms are different indeed: Anabaptists and Anglicans, Arminians and Calvinists, Methodists and Lutherans, and increasingly, Roman Catholics and Orthodox.

From my perspective, while pietism may have enriched the Reformation churches to some extent, the heritage of revivalism represents a counter-Reformation that in many respects went even further than Trent in the direction of Pelagianism. Hence, on his American visit, Dietrich Bonhoeffer could refer to the religious scene as “Protestantism without the Reformation.” In both faith and practice, Reformation Christianity differs from the sort of Evangelicalism represented, for example, by Charles Finney, more radically than it does with Rome or Orthodoxy.

So there is the Reformation stream, which has always had an influence beyond its numbers, particularly through immigration of confessional Protestants and the legacy of Old Princeton, and then there is the revivalist stream, which feeds into the vast ocean of Wesleyan, Holiness, and Pentecostal Christianity. When you add the growing popularity of Anabaptist, Roman Catholic, and Orthodox traditions, as well as fresh appreciation for the heritage of Protestant liberalism among some younger theologians, Evangelicalism may increasingly be incapable of theological definition.

The irony in all of this is that Evangelicals seem to be camping out in the hallway. Blending their own cocktail, Evangelicals may show appreciation for a variety of traditions without ever belonging to any one.
Posted by DH at 2:19 AM