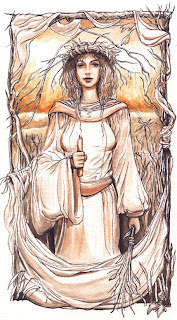 Today's "must read" comes from a fascinating Frank Furedi article in Spiked Online. It concerns the actions of Western religionists who have discarded theology, personal morality, and evangelism and yet desperately require some raison d’être to keep going. Their solution? Eco-spirituality! Check it out.

These days, moralisers find it easier to make people feel guilty about their impact on the environment than about committing one of the seven deadly sins. Not surprisingly, many religious institutions are busy reinventing themselves by promoting ecological virtues and preaching against the eco-sins of polluters.

On occasions, the attempt to recycle traditional theological concerns in a green form becomes a caricature of itself. In August, Dom Anthony Sutch, a Benedictine monk, announced that he would hear eco-confessions of sins against the environment at the Waveney Greenpeace festival, in a confessional booth carefully constructed from recycled materials. The good monk clearly practices what he preaches. He tries ‘very hard’ to live a green lifestyle and is proud of his principal achievement – reducing his electricity bill by 30 per cent. This mock ritual is unlikely to offer penitents’ salvation or redemption, but their ‘awareness’ will be raised. And these days being ‘aware’ is recognised as akin to being virtuous.

Sometime back in the 1980s, Western societies gave up on the project of rescuing ‘traditional values’ and morality. From time to time, conservative politicians and moral entrepreneurs have attempted to launch back-to-basics crusades promoting ‘family values’. However, their lack of popular appeal has only exposed society’s estrangement from these traditions. Indeed by the Eighties, even religious institutions found it difficult to uphold their own authority with conviction. Instead of influencing society many churches began to internalise the attitudes associated with the lifestyles of their increasingly individualised consumerist flock. The last quarter century has seen a steady diminishing of religious authority in Western societies. Debates about the role of women priests, homosexuality and marriage indicated that religious institutions have become confused about their own relationship to traditional values...

The appeal of eco-spirituality to so many different religions is a testimony to the powerful influence that environmentalism exercises over contemporary culture. At a time when traditional institutions find it difficult to connect with popular concerns, environmentalism is still able to transmit ideas about human responsibility through appealing to a sense of right and wrong. That is why the authors of children’s books and school officials also use environmentalism as a vehicle for socialising youngsters.

However, eco-spirituality cannot really compensate for the loss of traditional moral authority. Indeed the very embrace of the environmentalist agenda can only accelerate the decline of institutions that cannot give meaning to the religious doctrines on which they were founded. The shift away from God towards nature inevitably leads to a world where the pronouncements of environmentalist experts trump those of the priesthood. It will be interesting to see what will remain of traditional religion as prophecy and revelation is displaced by computerised climate models...