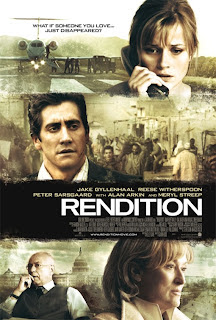 From James Taranto's Best of the Web column over at WSJ Online comes this Tinsel Town tidbit:

The Washington Times has a heartening bit of show-business news:

It doesn't matter how many Oscar winners are in front of or behind the camera--audiences are proving to be conscientious objectors when it comes to this fall's surge of antiwar and anti-Bush films.

Both "In the Valley of Elah" and, more recently, "Rendition" drew minuscule crowds upon their release, which doesn't bode well for the ongoing stream of films critical of the Iraq war and the Bush administration's wider war on terror.

"Rendition," which features three Oscar winners in key roles, grossed $4.1 million over the weekend in 2,250 screens for a ninth-place finish. A re-release of "The Nightmare Before Christmas" beat it, and it's 14 years old. . . .

Beyond the fiction features, the anti-Iraq war documentary "No End in Sight" (box office: $1.4 million) couldn't capture the indie crowd, beating a swift retreat to DVD next Tuesday despite glowing reviews.

Brandon Gray, president and publisher of www.boxofficemojo.com, says audiences seek out movies for inspiration, for laughter and to be moved. "Many of these recent dramas fail on all those fronts," Mr. Gray says. "They're too heavy handed in their presentation."

On the surface this would appear to be a market failure: a series of bad business decisions driven by ideological zeal. But then again, today movies are a global business. It's possible that these films, having bombed in America, will fare better in overseas markets, where moviegoers are more likely to look askance at America.

Hollywood decision-makers selling out America to make a buck? Talk about your cultural contradictions of capitalism.
Posted by DH at 3:14 AM