Ahmadinejad Is Welcome Where the ROTC Is Not 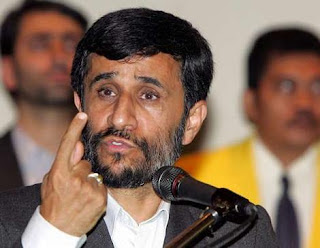 As William Kristol points out in this piece for the Weekly Standard, Iranian President Mahmoud Ahmadinejad, a known supporter and supplier of anti-West terrorists, gets the honored nod to appear on the Columbia campus -- while the ROTC remains banned!

As Columbia welcomes Ahmadinejad to campus, Columbia students who want to serve their country cannot enroll in the Reserve Officers Training Corps (ROTC) at Columbia. Columbia students who want to enroll in ROTC must travel to other universities to fulfill their obligations. ROTC has been banned from the Columbia campus since 1969. In 2003, a majority of polled Columbia students supported reinstating ROTC on campus. But in 2005, when the Columbia faculty senate debated the issue, President Bollinger joined the opponents in defeating the effort to invite ROTC back on campus.

But Kristol has yet more to say about Ahmadinejad's Columbia show.

It should go without saying that the appropriate thing to do, when the Iranian ambassador called Columbia, would have been to say: No thanks. Or just, No. But that would be to expect too much of one of today's Ivy League university presidents.

In fact, the introduction with "sharp challenges" by Bollinger makes the situation even more of a disgrace. Now there will be the appearance of real dialogue, of Ahmadinejad answering challenges, which further legitimizes the notion that Holocaust denial, say, is a subject of legitimate and reasonable debate. But if Bollinger had chosen to deny Ahmadinejad's request, or not to dignify Ahmadinejad's appearance by his presence--then Bollinger would have been denied the opportunity to lecture us, in Columbia's press release, to this effect: "It is a critical premise of freedom of speech that we do not honor the dishonorable when we open the public forum to their voices. To hold otherwise would make vigorous debate impossible. That such a forum could not take place on a university campus in Iran today sharpens the point of what we do here....This is America at its best."

Actually, this is a liberal university president at his stupidest. As Powerline's Scott Johnson put it, "Columbia's prattle about free speech may be a tale told by an idiot, but it signifies something. And President Bollinger is a fool who is not excused from the dishonor he brings to his institution and his fellow citizens by the fact that he doesn't know what he is doing."
Posted by DH at 10:43 AM