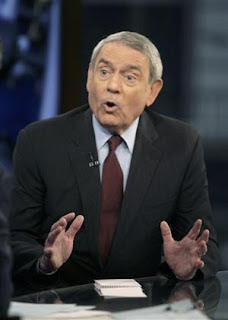 "This was in many ways a fraud. It was a setup." (Dan Rather)

Oh. Is "Hurricane" Dan finally admitting the truth about the forged documents, the biased sources and the sloppy, vindictive reporting that got him dropped from CBS?

This is simply one of the lines he used with Larry King last night in describing CBS brass and the panel of Louis D. Boccardi, retired chief executive of The Associated Press and Richard Thornburgh, former U.S. attorney general, who investigated Rather's unprofessional behavior.

Though Mr. Rather claims to be "the most experienced reporter in the United States in covering hurricanes," he cannot tell which way the wind blows when it comes to detecting real frauds.

Poor fellow. Not only has his legacy been pretty much destroyed by his stubborn myopia about George W. Bush's military service, but Rather' s paranoia and self-aggrandizement are making him an increasingly pitiful character.