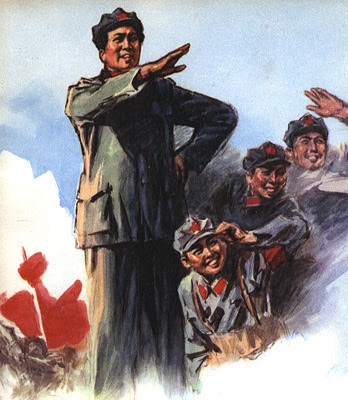 Do you still think of Communism as that reasoned economic philosophy that your university professor dreamed of? Or perhaps the stirring cause served by "idealists" like John Reed, Leo Trotsky and Che Guevera? Maybe your vision of Communism isn't really material but is more of an ethereal counter-balance to such villains as Joe McCarthy, J. Edgar Hoover, and Ronald Reagan.

However, if you dare, take a look at this one case...just one clear picture of what we know are hundreds of thousands similar to it that reveal the realities of what Communism produces; cruelty, injustice and the extremes of social repression.

Shuang Shuying, a 77-year-old Beijing resident, was sentenced to two years in prison this February for defending human rights and insisting on practicing her religion.

Already in poor health, Shuang endured severe torture whilst incarcerated, causing her weight to plummet from roughly 110 pounds down to just 73 pounds. Shuang has also lost her vision while serving her sentence, leaving her unable to recognize her visiting son. She was left to rely on her limited hearing to communicate.

Shuang's father, Shuang Deli was executed for being an anti-revolutionary in 1949 when the Chinese communist regime took power and confiscated the family's property. The family was made to witness his death. Before the family was able to claim the body, they had to pay for the bullet. History seemed to repeat itself following Shuang's first marriage, as her husband was sentenced to 20 years in a labor camp for being an anti-revolutionary.

To extricate her from the poverty brought about by having her assets taken and family members imprisoned, Shuang married a man named Hua Zaichen. The couple had two boys and one girl. In 1957, Hua was also sent to a labor camp and imprisoned for 20 years. Shuang was forced to raise the children without a father. During the Cultural Revolution, officials demanded that she divorce her imprisoned husband, but Shuang refused. For her disobedience, Shuang was beaten while hanging naked from a pillar by local authorities and made to kneel on a triangular frame.

Shuang's son, Hua Huiqi, became a Christian in 1990. Because of his involvement with the church, he was often followed and beaten by police. Shuang worried about her son's safety, so she accompanied him to his church. Shuang began to learn about Christianity and was later baptized in 1992. Since then, Shuang turned her dwelling into a boarding house for fellow Christians who came to Beijing appealing for their rights. Her service attracted police surveillance and continued harassment.

Because Shuang's house was very close to Tiananmen Square, officials viewed at as a politically defiant dwelling. When Beijing authorities won their bid to host the 2008 Olympic Games, they dismantled Shuang's home claiming that it hurt the "New Beijing, New Olympics"—the slogan chosen for the Games. The family was transferred to another suburb and detained in a facility known as "Guanjiakeng." The police supervised the family 24 hours a day, and frequently beat them...

Read the whole story here in the English-language edition of the Epoch Times.
Posted by DH at 3:35 AM