What if American Students Knew the Real Che Guevera? 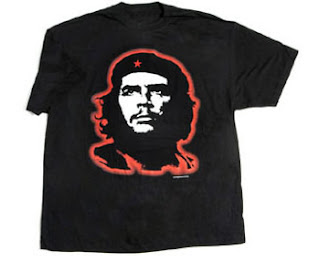 Mike Adams has an excellent Town Hall column here about the intellectual and moral bankruptcy displayed by journalists and students who continue to perpetrate a legacy of lies about Marxist terrorist, Che Guevera.

In his article, Adams lists a few of Che's most representative lines...ones that, were the media and academics doing their jobs properly, would be much more well-known than Che's snarling mug staring out from innumerable T-shirts. Below are just a couple:

"A revolutionary must become a cold killing machine motivated by pure hate."

"To execute a man we don't need proof of his guilt. We only need proof that it's necessary to execute him. It's that simple."

"If the nuclear missiles had remained we would have used them against the very heart of America, including New York City."

"Crazy with fury I will stain my rifle red while slaughtering any enemy that falls in my hands! My nostrils dilate while savoring the acrid odor of gunpowder and blood. With the deaths of my enemies I prepare my being for the sacred fight and join the triumphant proletariat with a bestial bowl."

Again, check out Adams' whole column right here.
Posted by DH at 11:12 AM