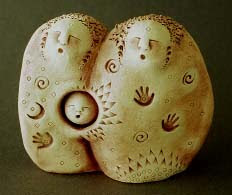 "Sometimes when the earth shudders it doesn't make a sound. That's what happened in Harrisburg, Pa., recently.

On April 30, a state Superior Court panel ruled that a child can have three legal parents. The case, Jacob v. Shultz-Jacob, involved two lesbians who were the legal co-parents of two children conceived with sperm donated by a friend. The panel held that the sperm donor and both women were all liable for child support.

...The case follows a similar decision handed down by a provincial court in Ontario in January. In what appeared to be the first such ruling in any Western nation, the court ruled that a boy can legally have three parents. In that case the biological mother and father had parental rights and wished for the biological mother's lesbian partner, who functions as the boy's second mother, to have such rights as well.

The idea of assigning children three legal parents is not limited to North America. In 2005, expert commissions in Australia and New Zealand proposed that sperm or egg donors be allowed to "opt in" as a child's third parent. That same year, scientists in Britain received state permission to create an embryo from the DNA of three adults, raising the real possibility that they all could be granted equal legal claims to the child if the embryo developed to term.

...Fortunate children have many people who love them as much as their parents do. But in the best interests of children, no court should break open the rule of two when assigning legal parenthood."

Elizabeth Marquardt writing in the opinion section of the The New York Times (registration required) of July 16, 2007. ("When 3 Really Is a Crowd")
Posted by DH at 9:39 AM