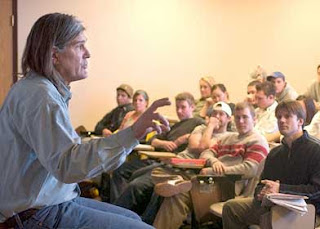 Also after the board made its decision, Brown and Board Chair Patricia Hayes spoke with the media. "It's been a long hard day," said Hayes. "Not an easy decision for the board."

Hmm. Let's see now. Ward Churchill, the infamous, self-proclaimed Native American professor (who turned out to be just your run of the mill anti-American professor), has also been proven to be a most pompous rogue. He is a windbag; a traitor to his country; a plagiarist; a lazy and lousy academic; an alarmingly brazen hypocrite; and an outright liar.

So why didn't Colorado University fire this blowhard long before this? And why was it so doggone agonizing for Ms. Hayes and her colleagues when they finally got around to it?

It's for this kind of education system that our property taxes keep going through the roof?

Oh yes; there was a particularly delicious moment in the proceedings when a bunch of young Churchill supporters showed up at the University wearing T-shirts with his perfectly ironic slogan: "It's not about scholarship. It's about politics."

That is about as accurate a summation of Ward Churchill's sad career as you'll ever find.
Posted by DH at 8:58 AM