National Debt Out of Control? It's Worse Than You Can Imagine. 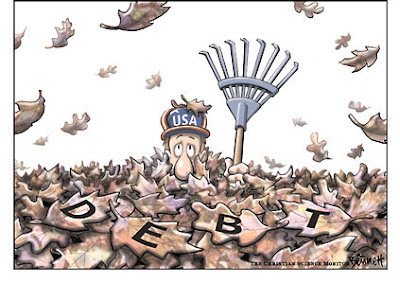 ...It may be safe to say that everyone today has learned to live with the established public debt amount of $8.6 trillion. This number comes from adding up the current deficits piling up year after year from the current budget line items...

It's obviously out of control.

But it's also shockingly understated.

See, to fund our bloated government, Washington collects taxes and then borrows $450 billion every year to make up the difference. That means on top of our tax dollars that our government burns through, it also puts another $1.2 million on the national credit card…every single day.

That's the damage just if you accept the current numbers, issued by the bureaucrats doing all that spending. But the real numbers are much worse than Washington is willing to reveal. How much worse?

I know, $8.6 trillion is already a tough number to wrap your head around. Are there even that many grains of sand on every beach in America? I don't know. But if you started tossing a dollar per second on a bonfire right now, you wouldn't hit $8.6 trillion for another 272,523 years.

How about $76.62 trillion? It would take you 2.42 million years. Yet Washington managed to pull it off in less than 150 years, roughly how long it's been since our government first dipped into the red. It hasn't looked back since...

From author Addison Wiggin (quoted in Summit Ministries Journal, June 2007)
Posted by DH at 9:54 AM