Reflections On Islam by George Jonas 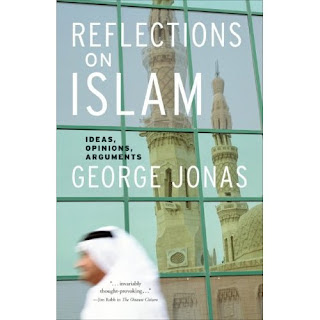 Glenn Penner, the Chief Executive Officer of Voice of the Martyrs and one of the contributors to its superb web site, writes the following about George Jonas' book, Reflections on Islam:

Whether Islam is a religion of peace or if Islam is different from Islamism is really rather irrelevant, as George Jonas has said repeatedly in his essays in the National Post. Essentially all terrorism in the world today is done in the name of Islam by Muslims. To repeatedly moan that such terrorists are not real Muslims is increasingly unconvincing and misleading. It is true that the face of terror and religious violence is not the only face of Islam. But it is one of them. Islam is not a united faith. To change metaphors, Islam is a house with many rooms and a number of them are occupied by those who believe that offensive violence is a legitimate tool in the service of Allah. Even moderates will admit that Islam is going through a difficult transition in recent years; for some, the transition is one that would take it back to its violent past if they are successful.

There are the voices who will sanely speak to this reality? They are, admittedly, few. George Jonas, whom I mentioned earlier, is one of them. Over the weekend, I finished reading his latest book, Reflections on Islam (Key Porter Books, 2007). Jonas is a columnist with the National Post and the CanWest News Service and one of the finest writers in Canada in my opinion. Reflections on Islam is a collection of his essays on Islam written between early 2001 and late 2006. Many of them I had read when they were first published and found them helpful then just as I still do. His arguments and opinions reflect an uncommon common sense that has been almost wholly lacking since 9/11.

George Jonas, by the way, is a Hungarian-born author, journalist, and playwright living in Canada. His books have been bestsellers and his writing for stage and feature film has been equally successful.
Posted by DH at 9:28 AM