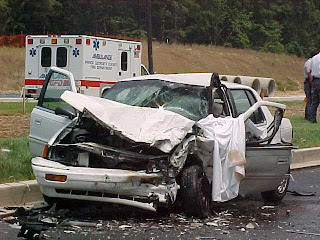 Traffic injuries are the leading cause of death in people ages 10 to 24 around the world -- a huge, overlooked and largely preventable public health problem, the World Health Organization said yesterday.

In a new report, the organization promoted a long list of suggestions to developing countries, where most of the deaths and disabling injuries occur. The improvements include safer roads and vehicles, better urban planning, helmet laws, prosecution of speeders and drunken drivers, better education of the driving and walking public, and simple interventions such as putting reflective tape on backpacks...

About 30 percent of all traffic deaths worldwide -- roughly 400,000 each year -- are of people younger than 25. Although teenage and young-adult drivers are at greatest risk, younger age groups also have high mortality. In 2002, traffic injuries were the third leading cause of death for children ages 5 to 9, behind pneumonia and AIDS. About 46 percent of traffic deaths in sub-Saharan Africa occurred in that age group that year...

Here's the rest of this alarming story from the Washington Post.

And please note the words from the first paragraph which I printed in black -- they represent the easiest and most effective thing that can be done to reduce this horrible number.
Posted by DH at 10:46 AM