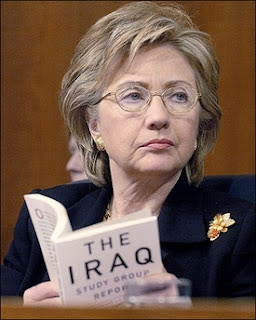 Dick Morris, of course, is very well acquainted with Hillary Clinton and his reports on her political career are always precise and provocative. This one, published here in Jewish World Review, deals specifically with Hillary's dramatic drop in the public opinion polls.

...One is driven to the conclusion that Hillary is defeating herself! Voters are watching the former first lady in her first extended period of national exposure since her health care debacle and don't like what they see. She appears scripted, phony, artificial, and even boring. Her ridiculous attack on Obama last month completely backfired. And her southern-preacher accent in Selma was downright scary.

Undoubtedly her flip-flop-flips on the Iraq War and insistence that she was just voting to send more U.N. inspectors are also stimulating a sense of cynicism about her and she has no other issue to take its place.

Her overall decline is serious, but her slippage among her key groups - a 10 point drop among all women and an 11 point decline among single women - must be particularly troublesome for her advisers.

Worse, from her point of view, there seems no obvious cure in sight. Hillary is not about to clarify her position on the war as she seeks to straddle a general election strategy of being a moderate with a primary campaign emphasis on moving to the left. She has no national forum for new issue positioning and the more she becomes exposed to public view, the more her negative ratings increase.

And she can't alter her personality more than she already has. In short, Hillary's in trouble.
Posted by DH at 10:46 AM