Done In By A Hairdo 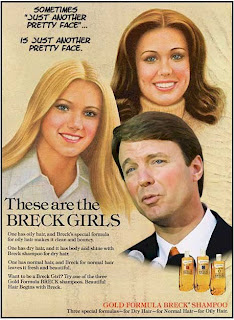 Three weeks after I wrote that I thought John Edwards might be going someplace in the race for the Democratic presidential nomination, I found out where he was heading: to the barber shop.

The candidate, who has been looking pretty and pretty impressive in defining "Two Americas" -- one for the rich and privileged, a lesser place for everyone else -- came up with a wonderful device to show us all what he meant. His campaign spending reports, required by the Federal Election Commission, revealed that he has been paying $400 for haircuts by a Beverly Hills cutter named Joseph Torrenueva. The guy must be good, because Edwards' hair sure looks good. So does the rest of him, helped along by a $250 shaping at the Designworks Salon in Dubuque, Iowa, and $225 at the Pink Sapphire spa in Manchester, N.H.

Well, the man has great hair. My barber tells me I do, too, and he only charges 20 bucks.

That's $20 of my own money. Edwards, who has a couple of thousand times as much money as I do, pays for his tonsorial needs from campaign funds. He travels the country asking concerned citizens for money so he can get haircuts and body polishing. Where I come from that is called a real sense of entitlement...

And, to refresh your memory of just how seriously John Edwards takes his hair, slip on over to this Vital Signs Blog post from a couple weeks back. You'll see the evidence in a startling "fashion."
Posted by DH at 10:57 AM