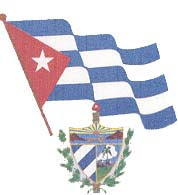 I'm pleased to announce an important new front in the battle for a free Cuba, a cause in which Vital Signs Blog has frequently expressed its enthusiastic support. That new development is the revised, recharged website of Claudia Fanelli, Claudia4Libertad. It is an energetic, resourceful site I heartily recommend.

In particular, however, I'd like to point out two highlights from my time perusing her blog. The first is her most recent post which I print below:

In the past two days I have heard 2 outrageous reports from Hollywood and I don't know which one disgusts me more.

The first one I heard was that Sting, Mr. Amnesty International himself, is going to play a concert in CUBA! I scratched my head when I heard that and wondered if it were some type of misinformation. But no, Sting indeed has been invited and plans to play in Cuba. This begs the question- Why would a man so concerned with human rights agree to play in a country whose leader is a ruthless, cold-blooded, murdering dictator? Sting was apparently "overwhelmed by the Cuban culture and arts and the musicality" during his last visit, a source was quoted as saying. Well, isn't that touching. Was he perhaps also "overwhelmed" by the torture, inability to speak freely, to move about freely, to dissent or to improve the living conditions of the Cuban people? Was this so "underwhelming" that they chose to ignore everything and agree to play- at Christmastime nonetheless- in Cuba?

The other piece of news which apparently is not new, is one I found when I started to read Humberto Fontova's new (and fantastic!) book: "Exposing the Real Che Guevara and the Useful Idiots Who Idolize Him." I am so grossed out by this information I don't even want to write about it. But I will, so that people can see what is wrong with Hollywood. In his book, Fontova writes that Angelina Jolie (of United Nations Ambassador fame) sports a tattoo of Che Guevara on her body. (A search on Google confirmed this disgusting fact, not that I doubted Humberto Fontova, but I wanted to see the tattoo myself. I couldn't find any pictures.) The fact that she has a tattoo did not shock me as she is pretty much covered with almost a dozen or so. What makes me sick is that of all the people to idolize, to think his image is worthy of becoming a permanent part of her body, she would chose a person who summarily killed countless Cuban citizens based on their refusal, for the most part, to agree with his ideology. This tattoo is said to be on her rib cage so it's not likely to be seen in public but nonetheless, Angelina Jolie, so concerned with human and childrens' rights has chosen to mar her body with the likeness of a killer of children as well as men and women. She is in good company- convicted rapist Mike Tyson and ousted former soccer star and drug addict Diego Maradona also have tattoos of Guevara. I may reconsider that Ronald Reagan tattoo after all.

The second thing I'd like you to note from Claudia's blog is the lengthy essay she provides from Alberto de la Cruz, "The Tribe of Cuba." It is a stimulating, impassioned argument as to why Cubans and Cuban-Americans are considerably to the right of other Latins. The reason? They know Communism up close and personal! Furthermore, Mr. de la Cruz makes a very persuasive appeal to other Latinos to carefully consider the bitter fruits of socialist theory and rhetoric in order to make the Latino community a more honest, more thorough, more effective force for justice in Cuba...and beyond.