Correspondence With the NU Regents Regarding Cloning Ban 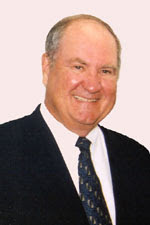 Below is a copy of a letter I sent to the Nebraska University Regent of my district, Howard Hawks (shown at left) followed by a copy of Mr. Hawks' reply. I urge others here in Nebraska to do the same for whatever happens in the legislature, the issues of cloning and embryonic stem cell research will continue to be of crucial importance to NU officials.

At the close of World War Two, the Allied forces discovered a most revolting element of the Nazi regime; namely, a vast library of scientific data that had been obtained through Nazi experimentation involving concentration camp captives and prisoners of war. Many of the experiments involved subjecting prisoners to a variety of tortures that frequently led to their deaths. It was an unmitigated horror that rightly shocked the free world and the Allied voices were unanimous in decrying this sordid exploitation.

However, what was to be done with the knowledge itself, the fruit of those barbaric experimentations? There were some voices that suggested the information, as immorally acquired as it was, could nevertheless be used for the good of mankind and the advancement of science. And indeed the Communists of the Soviet Union did hold on to the data they obtained.

But the Allied governments, standing on those moral principles that were basic to the world’s historic religions, made a momentous decision that contemporary American politicians, academicians and others citizens should emulate in our era. The Allies said, “No way.” They would not stain themselves with such evil…such illicitly achieved science. The data was destroyed and a banner was thus raised for the sanctity of life and the morality of Western civilization.

You, of course, can see the relevance of this situation to those debates now raging over research that deliberately creates life to destroy it. Please work for and vote for LB 700, the Human Cloning Ban.

Thank you for your letter indicating your position relative to LB 700, human cloning ban. I hold the same position that you do.

I am glad you reminded me of the experiments done by the Nazi regime. As I contemplate positions on legislation such as LB 700, it will be an important facet of history to remember. Not many people here are connecting this to LB 700, but as you indicated, there is a direct connection.

Again, thank you for feeling free to contact me. I appreciate your input.