Not All Duct Tape Is Considered Equal 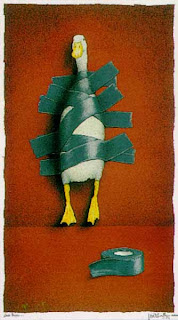 From the Family Research Council's e-mail updates comes another report of "selective censorship" by the autocrats at a government school:

Try as they might to smother the pro-family message, school officials across the country had a difficult time silencing the 7,000 students in 49 states who participated in the Alliance Defense Fund's (ADF) "Day of Truth" last week.

In one instance, a Maryland high school told student Beth Otradovec that she couldn't post signs or distribute fliers about the alternative to homosexuals' "Day of Silence." After receiving a letter from ADF legal counsel outlining Beth's constitutional rights, the school quickly changed its mind. In Allendale, New Jersey, conservatives had similar success. While endorsing the liberal "Day of Silence," North Highlands Regional High School banned students from participating in a counter-event--that is, until ADF brought suit against the school.

Unfortunately, the issue has not been resolved in Muskegon, Michigan where David Gardiner was suspended for wearing a piece of duct tape on his shirt that said, "I'm straight." School administrators considered the message offensive yet protected the rights of other students to put duct tape across their mouths to endorse a lifestyle of sexual deviancy that undermines personal health and undercuts moral norms.

ADF's project unites real compassion with real courage - to speak the truth in love.
Posted by DH at 2:41 PM