The Real Global Warming: Russia Turns Up the Heat 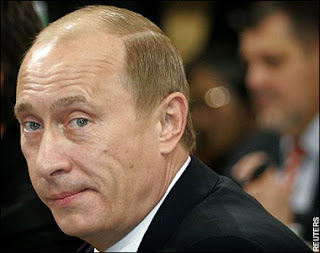 Metro New York's Jason Notte has some penetrating comments and an insightful interview with Ariel Cohen, senior research fellow at the Heritage Foundation, (photo at right) concerning Russia's recent saber-rattling. As many believed, the conversion of Russia to justice, democracy and peace was both very shallow and short-lived. Below is printed a substantial portion of this piece.

KGB agents making headlines. Russian journalists turning up dead. Moscow applying pressure to Eastern Europe. If the latest events involving Russia aren’t the beginning of a new Cold War, they may be bringing a chill to the global political climate.

The latest temperature drop came yesterday, when Russian Gen. Nikolai Solovtsov directed a stern warning toward the Czech Republic and Poland — both of which expressed interest in hosting U.S. missile defense bases.

“If the governments of Poland and the Czech Republic take such a step ... the Strategic Missile Forces will be capable of targeting these facilities if a relevant decision is made,” Solovtsov said. The announcement came 10 days after Russian President Vladimir Putin warned of a “new Cold War,”during a speech in Munich that stunned the West...

...[Question to Dr. Cohen] -- What does Gen. Solovtsov’s statement yesterday say about the political climate between Russia and the West?

What we are witnessing is post-Cold War security collapsing before our eyes, and European nations once again being held hostage to Russian political ideology.

What is Moscow’s plan in terms of foreign relations?

Russia is trying to crawl its way back to equal footing with the U.S. on the global stage and wants to play strategic nuclear games with new allies and play games with resources in places like Iran, Turkmenistan and Qatar. It wants to be back in the fold and is willing to create a nuclear axis including Iran and China for leverage.

What does this mean for the former Soviet republics and Eastern and Central Europe, which benefit from Russian energy and are under scrutiny by the Russian military?

They will once again become front-line states in the conflict with Russia, and will be held hostage by the Russians. While it may sound selfish to say, I think many of them want to be there because it makes them important and this time they are on the “right side,” meaning they are aligned with the U.S.

What will the repercussions be for the U.S. and its allies?

Many nations in Central, Eastern and even Western Europe are becoming pro-U.S. and anti-Russian as a result of some of the latest words from Putin. His speech a few weeks ago was a cold shower for many Europeans and left some divided. There are those who believed he made good points about Bush, but there are many who believe that his words are why NATO needed to expand in the first place.
Is a second Cold War a legitimate possibility?

If Russia chooses to engage in a second Cold War while the U.S. is otherwise engaged in Iraq and Afghanistan, then it will get its Cold War. I don’t think the timing of Putin’s statements and actions are accidental. However, I hope it won’t deteriorate into a new Cold War, because it would come at a tremendous cost to the Russian people and would be much harder on them than on us.
Posted by DH at 12:42 PM