Memo to Tom Brady: Your Idea of "Fatherhood Pride" Is Sadly Deficient 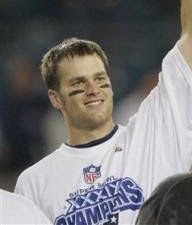 Here is the A.P. report on Tom Brady's pride in becoming an illegitimate father. No, he never bothered to respect the child's mother (actress Bridget Moynahan) enough to marry her. Nor was the pregnancy enough to keep him at her side (he's moved on to other chicks now). Very sad. Very shameful.

Tom Brady may be a Super Bowl winner but his irresponsible "frolic then flight" approach to the sanctity of sexuality and his sad abandonment of a dad's duty to fully support mother and child (a fat checkbook doesn't replace a faithful father, Tom) makes him just another in a long line of deadbeat dads... a loser in life's most important game.
Posted by DH at 2:40 PM