Despite concerted opposition from pro-life advocates, HR 4 won its Congressional vote, 225 to 170. If it becomes law, Medicare will be better positioned to ration health care -- another shell game by which "care containment" masquerades innocently as mere "cost containment." Here's Steven Ertelt's story about the issue from Life.News.com.

And here are a few remarks from one of the Congressmen who voted against the bill, Nebraska's own Lee Terry... 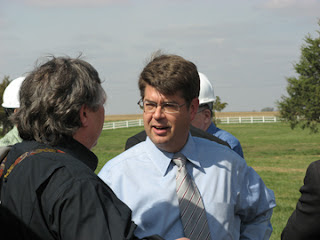 I voted against legislation that would restrict seniors' access to critical, life-saving drugs and also restrict efficiency in the private sector's proven ability to negotiate lower prescription drug prices, as we have seen during this first year of the new Medicare Prescription drug benefit.

We must continue to bring down the costs of prescription drugs, but the Democrat Drug Price Negotiation Act (H.R. 4) would do nothing to address issues such as the so-called "donut hole," which is one area where improvement is needed in Medicare Part D.

The Medicare Modernization law of 2003 was an important first step in providing a modern health plan for seniors including prescription drug coverage, while allowing cost-control in a free market, which lowers prices. Adoption of H.R. 4 would be a setback to the progress that has been made to ensure seniors have the health care they need.

Of course, thanks are in order to Congressman Terry and the others who voted against H.R. 4. And letters, calls and e-mails are also in order to the President to urge his veto of this bad bill.