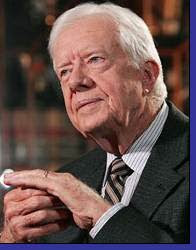 "I think Carter and Clinton want to keep Baptist as an identity, but they want to do so by gutting what most Southern Baptists believe in, such as authority of Scripture and the exclusivity of Jesus Christ as Savior and Lord," said Kevin Shrum, pastor of Inglewood Baptist Church in Nashville.

"My question is: Are they going to produce literature, start a seminary, do world or local missions or, from what it appears to me, is this just a front for political activity for churches and individuals who agree with their positions?"

This news story from the Tennessean ("middle Tennessee's #1 online news source") is predictably weighted but there are a few worthwhile moments. The above comment is one of them.

A clearer picture is painted by John-Henry Westen in this article written for the Christian Post. For instance, Mr. Westen quotes more of the the principal players, gives much more background, and puts the move in a broader context. Here are a few excerpts:

...While Clinton with his staunch abortion support, womanizing and support for homosexuality may have little concern for his being seen as a faithful Baptist, the situation is very different for Carter. While he did support abortion, and homosexuality, Carter's stands on these issues were more nuanced than those of Clinton. Moreover, Carter has distinguished himself, following his short stint as leader of the United States, through his charitable initiatives, prime among them Habitat for Humanity.

While many would see it as just another attempt to water down Christianity to the level of political correctness, Carter evidently sees his initiative as something special. "This is a historic event for the Baptists in this country and perhaps for Christianity," Carter said at a press conference announcing the convocation...

...Carter's views on Christian religion insist on the allowance of women pastors, on a focus on the poor, peace, the environment, and avoidance of the hurtful, divisive issues of abortion and homosexuality.

Morris H. Chapman, President of the SBC Executive Committee, has noted in the past that Carter was originally embraced by Baptist conservatives in 1976 when he publicly described himself as a born-again Christian. Chapman suggests that Carter lost favor with conservative Christians after such actions as appointing Sarah Weddington – the lead attorney in the landmark 1973 abortion case, Roe v. Wade – to a White House position when he was assistant to the president.

With regard to homosexuality Carter would allow for homosexual “marriage” but says he would not force churches to perform homosexual weddings. In an interview with the homosexual publication The Advocate in January 2006, Carter said of homosexual “marriage”: "If an individual church or synagogue doesn't want to have marriage vows expressed by gay people, I think that ought to be a religious decision. But under no circumstances do I think a gay couple ought to be deprived of their rights as citizens..."
Posted by DH at 10:38 AM