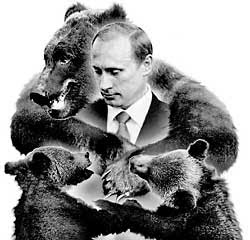 With the West focusing on the terrorist threats from Iraq, Iran and North Korea, it may be that the dangers yet posed by some old enemies may be overlooked. With that in mind, let's take a quick peek at what Russia has been up to the last few days:

* Despite the arrogance and illegality of Belarus in the recent fuel crisis, Russian President Vladimir Putin has announced that Russia will continue to support Belarus' economy, but at a "significantly reduced" level. He explained to TV viewers that the solution to the problem ended up being a nearly $6 billion subsidy by Moscow to Minsk and "is a payment by Russia for a calm and smooth...method of transition to a market relationship." (Uh huh; just what Communist dictators like Lukashenka and Putin aspire to: calm, smooth transitions to market relationships.)

* Putin admits, "the dispute has definitely damaged our reputation as a reliable supplier" of energy to Europe. The repeated calls by several E.U. leaders for Russia to find efficient means of fuel transport that doesn't require pipelines across unreliable countries is proof of that. So, yes; the crisis certainly hurt Russia's reputation with Europe. But even more, the regard for Belarus (already seen as a corrupt and unstable minor player) hit a new low. Many are wondering if Russia's action signifies a new aggressiveness in dealing with the recalcitrant Belarus. And most of the Europeans wondering that are hoping for it as well. One Russian news magazine opined that, in the future, Lukashenka would definitely have to make further concessions to his larger and stronger partner and cease insisting on Belarus being treated as Russia's equal "as if Russia were merging into Belarus, rather than tiny Belarus, with a population no greater than Moscow's, were merging into a union with Russia."

* For Belarus' part, Lukashenka continues to talk tough. "If Russia introduces duties on key Belarusian goods, Belarus will impose duties or some other charges on the Russian Federation's key goods," he said. "You are well aware of what key goods the Russian Federation delivers to and through Belarus. That's why it seems to me that many, both in Russia and our country, have realized that the deterioration of relations between the two countries would be a huge loss in terms of the image and trade and economic relations, let alone politics." Lukashenka, of course, denied any responsibility for the "escalation of tension" in the fuel problem.

* Some E.U. leaders have been more frank than others about the unreliability of Russia and its leader. For instance, German Chancellor Angela Merkel was quoted by the Guardian (U.K.) as saying that she does not agree with her Social Democratic predecessor, Gerhard Schroeder, who maintained that Vladimir Putin was "an impeccable democrat." Merkel noted: "I have not said that yet and I am not going to say it now. With Russia, I use the words strategic partnership."

* As if to underscore why so many in the E.U. (and the United States) have lost trust in the Russian bear, on January 12, Russian and Chinese diplomats both vetoed a U.S. resolution in the UN Security Council criticizing Myanmar (Burma) for their outrageous human rights abuses. It is the first time in 35 years that Russia and Red China have cooperated in preventing the U.N. Security Council from passing a resolution. An ominous development.

Before writing up this review, I checked through several sources but, like always, I especially utilized the excellent Radio Free Europe web site. RFE offers the best, most up-to-date information and it is written from a viewpoint that honors freedom and justice much, much more than the usual news organization. I recommend it highly.
Posted by DH at 3:27 PM