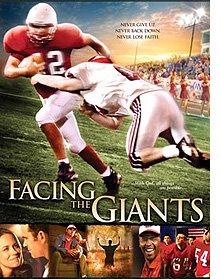 Whether you've seen the movie or not, you may be interested in the phenomena represented by the new film, "Facing the Giants." After all, it's not everyday that a genuinely Christian film is made. Nor is it a common occurrence that such a film gets a national release in theater chains, scoring nearly $3 million in less than two weeks.

And still more unique, "Facing the Giants" is a movie created by a local church.

Here's the official web site of the film.

Here is a short article dealing with the strange fact that the Motion Picture Association of America required "Facing the Giants" to bear a "PG" rating because of its evangelistic elements.

Now, of course, an overtly Christian film can expect to be panned by the Hollywood powers that be and by most MSM movie critics. And it has been. But how does one explain the condescending dismissal of "Facing the Giants" found over at Christianity Today? The review there is bad enough but just to make sure you get the message that "Facing the Giants" is a sophomoric, unrealistic religious tract, they print excerpts from several others who pan the film, including some from what they tell us represent the 73% of professional film critics who gave a "thumbs down" to the flick. What's the deal here?

Well, it's not really out of character for CT to pull this kind of stunt. After all, for many years now, CT has loved playing the role of the hip, sophisticated cosmopolitan who clearly outclasses his cloddish, fundamentalist cousins. Therefore, a film made by a Baptist church that openly presents the gospel, one that doesn't pay homage to style, subtlety, nuance, suggestion, complexity and the host of other cinematic buzz words that CT reviewers like to use in talking about real movies, was bound to embarrass these guys.

Shame on them. The team behind "Facing the Giants" wasn't trying to be Bergman or Fellini (Thank the Lord!). They were trying to use the arts to honor God, to encourage Christians, and to interest non-believing moviegoers to consider the life-changing power in the gospel of Christ. And, bless their hearts; they did so with great skill and success. For CT (and the other religious curmudgeons they cite) to ignore those essential facts and instead focus on the differences between the film and the "regular" Hollywood tripe was petty and sadly misdirected.

If you're the kind who does like reading about movies, let me recommend the following who give "Facing the Giants" a much fairer, more respectful hearing. One. Two. Three. And, last but not least, Four. Check 'em out.
Posted by DH at 10:14 AM