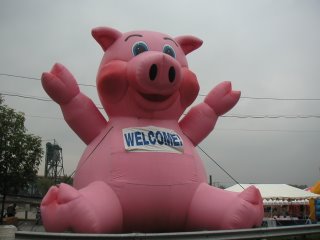 Staring into the abyss of minority status in Congress, Republicans signaled dedication to pork barrel spending before recessing for midterm election campaigning. Behind closed doors, the GOP's King of Pork dressed down the party's leading foe of earmarks. In the open, the last bill passed before the election was filled with carefully hidden pork.

In a caucus of Republican senators, 82-year-old, six-term Sen. Ted Stevens charged that freshman Sen. Tom Coburn's anti-pork crusade hurts the party. Stevens then removed from the final version of the Defense Department appropriations bill Coburn's "report card" requiring the Pentagon to grade earmarks. The House passed, 394 to 22, the bill, stripped of this reform and containing some 2,800 earmarks worth $11 billion. That made a mockery of a "transparency" rule passed by the House earlier this year, supposedly intended to discourage earmarks...

Not ticked off yet? Then read the rest of Bob Novak's column roasting these villains.
Posted by DH at 11:22 AM