Attempting the End Run Around the Abortion Clinic 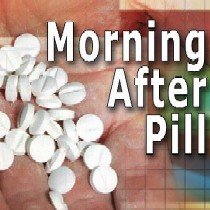 The disinformation campaign for the Morning After Pill is in full swing with virtually no one in the MSM admitting the scientific facts about the drug's abortifacient properties and it's severe dangers to women. What else is new? Therefore, like with so many other issues, the light must be shown from the alternative media...and then, using that information, from you and I.

Here are a couple of the best articles...

This one by Susan Wills over at NRO was written a couple of weeks ago (before the FDA's bonehead decision to allow over-the-counter sales of the drug) but her analysis of the issue remains in force. Below is her introduction with the rest of her column detailing the facts behind these three assertions.

...Here’s what science tells us:

First, studies — many conducted by proponents of emergency contraception (EC) — show that widespread access to EC does not reduce rates of unintended pregnancy or abortion.

Second, repeated use of Plan B is not as safe as advertised.

Third, Plan B has at least four different modes of action, two of which are post-fertilization effects (acting on the newly created embryo). Depending on when in a woman’s fertility cycle sexual activity occurs and Plan B is taken, ECs can end the life of a developing human being...

Over here is a position paper (of sorts) developed by CareNet to help their pregnancy center counselors answer questions about the Morning After Pill. It is a very helpful article as is this response to the FDA's actions by the Christian Medical Association.

And finally, let me drop in this simple but penetrating observation about the MAP from pro-life heroine Dawn Eden over at her blog, the Dawn Patrol...

A table on Planned Parenthood's own Web site shows that it takes as many as 40 ordinary oral contraceptive pills — all of which require a prescription — to equal the hormones in Plan B, which is now available to women as young as 18 without a prescription.

Some "victory for women's health."

So, riddle me this: Why do oral contraceptives still require a prescription, seeing as they're so safe that you can take 40 times the prescribed amount anytime you want?