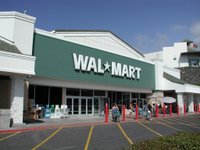 The Family Research Council is reporting that Wal-Mart has recently entered into a new relationship with the National Gay and Lesbian Chamber of Commerce. As if Wal-Mart wasn't having enough problems with its image nowadays, the huge chain is now further endangering its reputation with the regular Americans who buy their wares.

The FRC explains that Wal-Mart "has never discriminated against homosexuals who want to purchase their products at low prices. Nor has it discriminated in hiring against homosexuals. But that is not enough. The activists demand that Wal-Mart grovel. They demand that Wal-Mart take sides in the great cultural clash over marriage. This is an affront to the millions of traditional families that patronize Wal-Mart. I wouldn't be surprised if this causes a rollback in Wal-Mart's customer base."

Indeed, the FRC is asking Christians to express their displeasure to Wal-Mart officials by making a copy of this nifty flyer and calmly dropping it off at the Customer Service Desk at your nearest Wal-Mart. It's a great idea. I would also encourage you to spread the word by making other copies of the flyer to pass around. Why not ask your pastor if you can post one at your church too?
Posted by DH at 9:04 AM