A group of opposition leaders and activists launched the two-day Other Russia conference in Moscow on July 11 to raise and highlight opposition concerns on the eve of the G8 summit in St. Petersburg...Lyudmila Alekseeva, who heads the Moscow Helsinki Group, said that participants want "to show the scale of civil resistance to the bureaucracy's trampling of our constitutional rights and freedoms and to activate our potential. This is not a declaration of war of society against the authorities. This is a call for peace between them -- but on honorable conditions for civil society, on conditions of equal partnership." 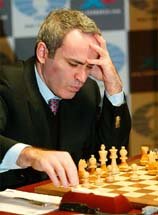 Opposition leader and former chess champion Garry Kasparov said the conference hopes to show the world that the Russia that President Vladimir Putin will display at the G8 summit differs from what he called "the real Russia."

Kasparov stressed that "Putin's agenda [at the summit] is not Russia's agenda. It's an agenda of the ruling elite that wants to use our national resources, our national treasure to promote its own self-interests. And Putin, as the leader of this elite, in our view, will be selling our national interest to make sure that the West stops any criticism over human rights and democracy in Russia..."

Several participants at the July 11 session of the Other Russia conference in Moscow said that the authorities used rough techniques to prevent many would-be participants from attending the gathering, the "Frankfurter Allgemeine Zeitung" reported on July 12. The participants noted that unidentified people confiscated would-be attendees' documents, beat the travelers, detained them, took them off trains, and planted drugs or explosives on them. The participants added that the authorities are so sure of their total control that they did not bother to respond to complaints about such practices.

Some U.S., U.K., and Canadian diplomats ignored Kremlin warnings and attended the gathering. U.K. Ambassador to Russia Tony Brenton told the BBC on July 11 that one of several people who tried to disrupt the conference called him an "imperialist." Brenton defended official U.K. presence at the meeting by saying that he favors the "widest possible political debate in Russia." He also justified U.K. participation in the summit, noting that it is best to discuss important issues with Russian leaders rather than ignore them...

Some liberal groups such as Yabloko and the Union of Right Forces boycotted the Other Russia meeting... to protest the presence of groups they dubbed nationalist or extremist, such as the National Bolsheviks... Conference organizer Kasparov dismissed their complaints, saying that those who did not come are not in the opposition. Opposition activist Valeria Novodvorskaya told RFE/RL's Russian Service, however, that she wants nothing to do with the conference. She noted that four organizations participating are not democratic, but rather "Stalinists and neo-Nazis. This represents the downfall of the Russian democratic movement, because the G8 will draw the following conclusion: 'We are right to stand behind Putin. Let him control this bedlam.'"

Outside the gathering, dozens of pro-Kremlin demonstrators stood clad in American Indian-style feather headdresses. One of them told RFE/RL's Russian Service that this outfit signaled their belief that the conference is bankrolled by foreign enemies of Russia, including the United States. The daily "Trud" wrote on July 12 that the conference is a "gathering of has-beens."
Posted by DH at 12:08 PM