Why Are We Not Winning Wars? 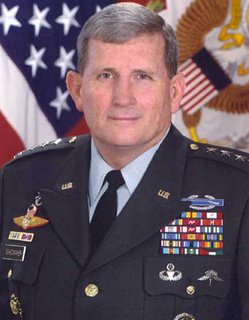 It's an old game we're playing; namely, wishing, hoping and talking about how badly we want something but refusing, in fact, to do what's necessary to get it. Check out this article -- but notice how brief the story is and how little coverage the general's remarks received eleswhere in the MSM.

Americans spent as much on "plastic Santa Clauses and tinsel" and other holiday niceties last Christmas season as they do on their military for a year, the Army's top general said Wednesday. Lamenting complaints by some about too much defense spending, Gen. Peter Schoomaker, the Army chief of staff, told reporters: "I just don't understand .... what's the problem?"

Schoomaker said the defense budget the Bush administration requested this year — nearly $440 billion, not including the costs of war in Iraq and Afghanistan — is just over 3 percent of the nation's $13 trillion overall economy. During World War II, military expenditures accounted for more than one-third percent of the entire economy.

"Here's what is amazing to me ... What do you think we spent on plastic Santa Clauses and tinsel and all this stuff for Christmas last year?," Schoomaker asked during a meeting with reporters. "The answer is $438.5 billion, roughly equivalent to the defense budget..."

..."I mean I don't get it," he said. "We've got a lot to be thankful for in this country and we've got a lot to lose. And one of the first responsibilities of government is to defend the country. The Constitution says that."

Schoomaker was discussing his fears that it might take a fight to get enough money from Congress over the next two years to rebuild the Army's equipment and supplies warn down in Iraq and Afghanistan.
Posted by DH at 12:13 PM