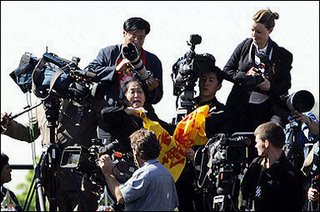 Mark Joseph has written a great column putting Wenyi Wang's shouting protest in perspective. Do read it in full but here's a teaser you can use to e-mail to your friends:

...Miss Wang's outburst may not be on par with a direct warning from the hand of God, but it was certainly in the finest tradition of speaking truth to power. The idea that she should be punished and spend six months in jail for breaking a law that punishes one who "intimidates, coerces, threatens or harasses a foreign official or an official guest or obstructs a foreign official in the performance of his duties" is ridiculous.

Rather, Miss Wang should be given a large book contract and given one of those Kennedy awards for political courage...

And, by the way, while you're e-mailing your friends, alerting them to this column, please urge them to send a letter to President Bush, asking him to do the right thing and publically intercede in Wenyi Wang's behalf. The President made a real bonehead play the other day when he apologized to China's President Hu Jintao for Miss Wang's protest. The very least Bush can do now is to apologize to Wenyi Wang and ask the courts to not only drop this prosecution but overturn the silly law underneath it.