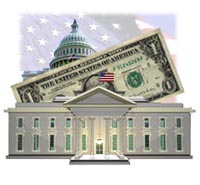 The staff writers over at the Family Research Council have a few disturbing facts to share with us --- and a few subsequent questions. Check it out.

Congress is spending $80 million a minute and there is no sign of them slowing down! Congress is currently working on a $100+ billion emergency spending bill for hurricane relief and the war on terror. I'll bet you didn't know that there's an "emergency" that requires Congress to spend $3 million for tourism in Kentucky or nearly $1 million for Dartmouth College. They're pretty far from a hurricane, but too close to the federal trough. President Bush--at last--is threatening a veto.

The Bush administration "strongly objects" to spend $700 million to relocate a "privately owned rail line that runs along the Mississippi Gulf Coast." That's Sen. Trent Lott's (R-MS) pet project. It just so happens it would also aid the casino industry in Mississippi. That's doubly offensive. Senate Majority Leader Bill Frist (R-TN) and Rep. Mike Pence (R-IN), chairman of the Republican Study Group, are both calling for the President to unsheathe his veto pen. I completely agree. Sen. Frist made his well-deserved reputation as a cardio-thoracic surgeon. He should wield his scalpel on this bloated spending bill. He now says he will support a veto--if necessary--to trim out-of-control federal spending. In my view, it's long overdue.

And, instead of trying to out-socialist the socialists, Republicans should give up their ill-considered investigation of oil industry executive salaries. If Congress really wants to help us at the gas pump, how about cutting the federal gasoline tax?

By the way, here's a few details of just what is hiding inside this "emergency spending" bill, courtesy of Tim Chapman's Town Hall column.