When Hollywood Went to War 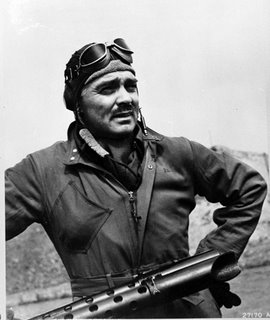 I know there have been a few articles like this floating around the last couple of years but John McCaslin's was one of the best I'd seen. It's a keeper...

Hollywood is missing in action when it comes to fighting for America in recent conflicts, not the least being the war against terrorism.

We hereby challenge readers to name one modern American celebrity, apart from the late football star Pat Tillman, who served or fought for his or her country in the past 15 years.

"Even Hollywood . . . sent its best to wars prior to Vietnam," University of Dayton professor Larry Schweikart reminds us in his new book, "America's Victories," writing that professional actors were as "thoroughly represented" in the fighting military during World War II as any other group.

In fact, we read an amazing list of Hollywood men who tossed aside lucrative scripts for their country. Topping the list, albeit technically too old to serve, was Clark Gable, who enlisted as a private and ended up flying B-17s over Europe. Jimmy Stewart started as a "buck private peeling potatoes," the author notes.