Huge Charity Donation Isn't Newsworthy -- Only Because It's From Dick Cheney 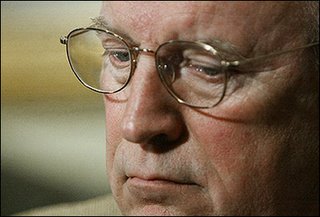 Let Vice President Cheney unload a hail of buckshot - and it makes mainstream media headlines as a defining moment is his failed vice presidency.

Let him file his federal tax return and it is reported by CBS News that "Cheney tops Bush in the battle of the bucks."

Let him donate what was the largest amount of bucks in history to charity by any public servant, and you guessed it - nary a headline.

But then again it was a paltry $6.87 million, more than three-quarters of the reported income of the Cheneys. Read this again: The Cheneys gave $6.87 million to charity in 2005.

A small story perhaps, but come on - doesn't a multimillion dollar contribution to charities by a vice president deserve special recognition? Frankly, I was astonished when I first read this and thought it was a typo because it was buried in a column that leads off with President Bush's tax return - which wasn't even newsworthy - just the typical annual report on the tax returns of the president and vice president. As a matter of fact, the AP headline read "Cheney's income 10 times the Bushes'. And the L.A. Times reported: "Bush pays taxes, Cheney awaits refund,"

I could go on with other headlines, but you get the point. Not one headline in the mainstream media that Cheney gave $6.87 million to charity. The "refund" headline by the L.A. Times is laughable. The reason he's getting a refund is because he overpaid in estimating his taxes and had too much withheld.

Another paper spun the AP story by saying not only did Cheney make ten times as much as Bush, but "He is looking for a $1.9 million refund." What gall. Another equally compelling headline would have been when a former vice president's tax return - Al Gore's - reported a paltry $367 in charitable contributions in 1997. Of course this item never made the headlines either - given the bias of the mainstream media...