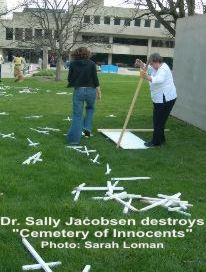 Dr. Sally Jacobsen, the pro-abortion English lit professor at Northern Kentucky University who led several of her students in destroying a pro-life display on the campus lawn has finally been charged with misdemeanors in the case. Six of the students have also been charged by Campbell County Attorney Justin Verst. Argues Verst: "The property was damaged... the crosses and the sign. They were thrown in the trash can. They were taken and vandalized. To me, it's pretty clear cut that's a crime."

The story (described in these Vital Signs Blog entries: 1 and 2) has received nationwide attention and it was feared the forces of political correctness would let these vandals skate away. But, thanks to Mr. Verst's action (and the facts that the vandalism was pictorially captured by the school newspaper and boasted of by the vandals themselves), at least a trial for the crimes has been deemed in order.

Jacobsen and the students were all charged with criminal mischief and theft by unlawful taking, plus Jacobsen was given a third charge of criminal solicitation for inciting and leading the students in destroying the pro-life display. The theft charge is a class A misdemeanor and punishable by up to one year in jail and a $500 fine while the criminal mischief and criminal solicitation charges are class B misdemeanors and could result in 90 days of jail and a $250 fine.

Northern Kentucky University has also placed the tenured professor on permanent leave -- she has announced that she will retire at the end of the semester.

Through her lawyer, Jacobsen (who earlier had apoligized - well, kinda' apologized) is claiming now that she will plead "not guilty" since her vandalism doesn't really constitute any kind of crime. "The intent was just an expression of freedom of speech," the lawyer said. "She saw harm coming from it [the pro-life display], and she was just expressing her attitude towards the harm." This, of course, is how liberals view fee speech nowadays. It's free unless they don't like it.
Posted by DH at 3:30 PM