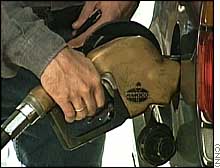 Here is a much different spin than the ones you usually see regarding the increasing cost of gasoline. The article comes from TCS (Tecnology, Commerce Society) Daily.

...According to the Bureau of Economic Affairs (see chart here), American consumer spending on energy as a fraction of total personal consumption has declined considerably since 1980. Whereas 25 years ago, one in every ten consumer dollars was spent on energy, today it's one in every sixteen bucks. In other words, what it takes to heat and cool our homes and drive to and from our jobs and vacation destinations is relatively less costly than it once was.

This goes a long way to explaining why even while gas prices rise this summer, and while they will be higher than they were through the 1990s, people will still be driving more -- it's much more of a value than it was a generation ago...

...Of course, no one likes to pay higher prices at the pump. And our political class, in a bi-partisan tizzy, is threatening to do something -- raising taxes, cutting taxes, more regulation, less regulation. But the price mechanism, even when it acts in ways we don't like, is something we monkey with at our peril. It serves a critical function by sending information signals throughout an energy market that is global and highly competitive; these signals help determine where best to allocate capital to increase supplies. The last things needed at this point are political maneuvers that will distort and warp these signals.

The energy market is already badly and inefficiently regulated as it is, a mish-mash of tax breaks, government subsidies, taxes and regulations. Almost everything being proposed from President Bush to Sen. Dick Durbin on down -- subsidies to alternative fuel sources, changing CAFE standards, tax breaks as well as windfall profits taxes -- would make a bad regulatory situation much worse...
Posted by DH at 3:10 PM