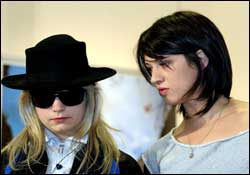 Amid the other recent scandals in the "mainstream media" publishing world -- the fake memoir of Oprah Winfrey protoge' Jim Frey; the "Navahoax" in which PEN Award winner Nasdijj was revealed to be anything but a Native American, and proofs of plagarism from several of the MSM's journalists and reporters -- here comes yet another.

It turns out that the Hollywood glitterati that have gone crackers over the work of the young, cross-dressing male prostitute named JT LeRoy have been suckered but good. LeRoy's works have been international best-sellers; they've been taught in university courses; they are the basis of a new film starring Asia Argento, Peter Fonda and Marilyn Manson.

But who really is JT Leroy?

A messy divorce and child custody fight has exposed JT Leroy to be, in reality, a 40-year old white woman who completely invented the persona because her work wasn't getting any attention from publishers on its own. So what was a failed author to do? Well, what Laura Albert did was to come up with an angle that pushed sleaze to new levels and played upon liberals' fascination with sexual deviancy. She came up with JT LeRoy and...voila...found publishing nirvana.

But will the leftist literary circles who gave such undeserving success to JT LeRoy be embarassed at being victims of the hoax? I doubt it. Lets face it -- if you admit to actually admiring an HIV-infected, transvestite prostitute with who provides kinky kicks to strangers -- you're not going to be embarassed easily. In fact, the MSM's attitude can be seen in the fact that only now is the scandal breaking in the American press. The story broke in England over a month ago.
Posted by DH at 11:05 AM