Is Europe Finally Waking Up to the Islamic Threat? 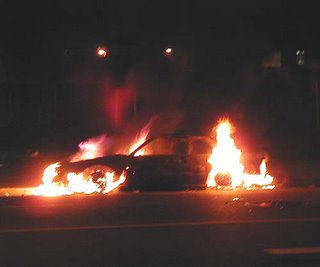 ...As long as Muslim demonstrators only shouted "Death to America" and "Death to Israel," Europe (and the rest of the world's Left) found reasons either to ignore the Nazi-like evil inherent in those chants (and the homicidal actions that flowed from them) or to blame America and Israel for the hatred.

But like the earlier Nazis, our generation's fascists hate anything good, not merely Jews and Americans. And now the Damascus embassy of Norway, a leading anti-Israel "peace at any price" country, has been torched. And more and more Norwegians, and Brits, and French, and Dutch, and Swedes, and the rest of the European appeasers who blamed America for 9-11 and blamed Israel for Palestinian suicide bombings, are beginning to wonder whether there just might be something morally troubling within the Islamic world.

Some on the Left here and in Europe are beginning to reassess whether America and Israel or their Islamic enemies are at fault...