Grace Is the Message in the Voice of God (Psalm 19) 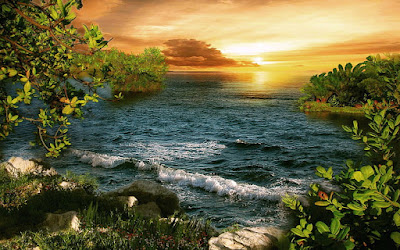 Psalm 19 is one of the most well-known and well-loved psalms because of the poetic declaration which introduces it. “The heavens declare the glory of God; and the firmament shows His handiwork. Day unto day utters speech, and night unto night reveals knowledge. There is no speech nor language where their voice is not heard.” (Psalm 19:1-3, NKJV) However, as lovely and profound as the opening verses are, they are but an introduction to two other sections of the psalm which emphasize the proper response to nature’s glorious revelations of God’s power, beauty, wisdom, and goodness.

To be sure, the first response to the order and beauty of nature should be praise and thanksgiving to the God Who made it and Who reveals truths about Himself through it.  We are to humbly worship the Lord Whose voice is communicated so universally, so constantly, and so majestically.  But the second section of the psalm teaches something even more important; namely, that we should recognize that God has extended and clarified His revelation by means of the written Word.  Indeed, it is in the law given through Moses and the prophets (and eventually through the divinely inspired writers of the New Testament) that the Lord reveals much, much more of Himself, His purposes, and the requirements He lays down for men and women to obey.

It is in verse 7 that the psalmist begins this second section. “The law of the law is perfect, restoring the soul.” David goes on in the next verses to describe God’s law as sure, right, pure, clean, enduring, true, righteous, desirable, and everlasting.  And those who appreciate and carefully follow God’s laws, David explains in these verses, will be made wise, will rejoice, will be enlightened, will be protected, and will receive great rewards.

So is it a good thing to appreciate the power of God in the thunderstorm and earthquake, to rejoice at the beauty of God in the sunrise and the waterfall, to be amazed to the point of worship at the intricacy and orderliness of the stars and seas and squirrels?  Of course.  God desires just such responses as these to His voice as expressed in His creation.  Yet more relevant, more important still are our responses of awe, thanksgiving, and loyalty to the moral law of God that is expressed directly and perfectly in His Word.

This thought is then expanded in the third and concluding section of Psalm 19 as David addresses the ongoing sanctification of His people; that is, our day-to-day gratitude for and obedience to the spiritual sharpening His written Word provides.

David begins this third section with the provocative question of verse 12: “Who can discern his errors?”  The possessive used (“his”) applies to man, not to God, as the Hebrew word translated here as “error” is used elsewhere to describe going astray, wandering, misleading, engaging in sin and folly. David is thus asking (of himself as well as others), “Who can fully understand one’s moral failure? Who can figure out why men act against their own self-interest by rebelling against God? Who can comprehend the huge distance between God’s holiness and man’s shallow and self-centered choices?”

In the next verses, David underscores the deliberate nature of sin. For instance, the Hebrew adjective which describes sins in verse 13, translated in most versions as  “presumptuous,” describes an insolent, defiant attitude towards God. We do not merely stumble into sin – we often look, evaluate, and then jump headlong into it.  This willful disobedience must be contritely admitted to God before we can move towards forgiveness and a fresh start. And that’s just where King David, long acquainted with God’s tender mercies towards the penitent, goes next. “Also keep back Your servant from presumptuous sins. Let them not rule over me. Then I will be blameless and I shall be acquitted of great transgression.”

David lifts up his prayer to a gracious God.  For though he has known God’s voice in creation and he has known God’s voice even more particularly pronounced in His law (including its warning against sin), yet he has turned aside from God.  He has failed to consistently heed those warnings. He has sinned, even defiantly so. David takes responsibility as he calls sin and transgression by their right names.  Yet, even at this, all is not lost!  For God’s holiness can be satisfied through the mercies He offers to honest, humble worshippers. And it is on the basis of God’s grace (demonstrated in the symbolic sacrifices of the Temple but eventually to be fulfilled in the complete atonement provided by the death of the Messiah to pay our penalty) that David confidently appeals for acquittal of sin and restoration of fellowship with God.

The suggestion that there is no or little grace expressed in the Old Testament is a silly idea and Psalm 19 is but one example of hundreds that show the real story.  In fact, Psalm 19 emphasizes God’s grace being provided in several ways. First, David praises the awesome power of God’s revelation in nature. That God thus reveals himself is a grand expression of His grace to mankind. Second, there is what’s often termed as “common grace” that God’s creation provides for all men. By His orderly creation, all mankind lives on a planet that makes sense, that allows for family and food production and navigation and thousands upon thousands of other blessings. That too is grace. Third, Psalm 19 acknowledges God’s grace in the revelation of His character, will, and wisdom through the written law.  In particular, David is grateful that God’s law is liberating and enlightening and empowering.  That’s sanctifying grace. Fourth, God’s Word extols His grace that provides salvation to man…and even eternal rewards for their faithfulness to walk according to His Word.

As I said at the beginning, Psalm 19 certainly deserves to be appreciated for the moving testimony about God’s created order with which it opens.  But there’s much more truth to embrace there. Indeed, Psalm 19 is a glorious song about the profound voice of God – a voice which continually expresses God’s amazing grace to mankind. Through creation…through the Word…through the existential power of the Holy Spirit -- God lovingly uses all three to express His character, His offer of atonement for sin, and His provision for strength to walk closely beside Him towards the life to come.