"Do the Job at Hand" -- Open Letters to the Supreme Court 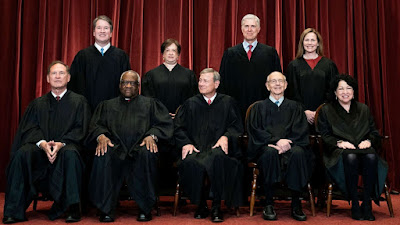 From last night's letter-writing party come these "open letters" to several of the Justices of the United States Supreme Court. Two of them will be sent later this afternoon to two of the genuine heroes of our day, Clarence Thomas and Samuel Alito, Jr. But four others will be sent to Justices whose service on the Court has been considerably less than stellar. Those very disappointing four are Justices Kavanaugh, Gorsuch, Barrett, and Chief Justice Roberts.

“Courage is contagious,” wrote Billy Graham. “When a brave man takes a stand, the spines of others are often stiffened.” You, Justice Alito, have that brand of courage and though it may seem like it’s not yet “stiffening” the spines of your fellow Justices, please know that untold numbers of Americans (and freedom-loving people around the world) are encouraged and challenged by your example.

Please stay the course. God is not sleeping and your reward will be substantial indeed.

Admiral Chester Nimitz once wrote, “God grant me the courage not to give up what I think is right even though I think it is hopeless.”

Sometimes, as in the wacky days of the present administration, the defense of the U.S. Constitution (let alone the historic ideals of Western civilization) seems almost hopeless. But thank the Lord that He uses men like you to stand with courage, integrity, skill, compassion, and humility to keep the Constitution’s message clear and strong.

You are in our frequent prayers.

Harry Truman once said, “America was not built on fear. America was built on courage, on imagination, and on unbeatable determination to do the job at hand.” Justice Barrett, “the job at hand” is to defend the Constitution, including allowing the key cases of liberty, justice, and the sanctity of human life to come before the Supreme Court in order for that Constitution to speak. You have too often already let those chances slip by – and the republic is very much the poorer for it.

Please…act in courage to do the crucial job at hand.

C.S. Lewis once wrote, “Courage is not simply one of the virtues but the form of every virtue at the testing point, which means at the point of the highest reality.” Justice Kavanaugh, it appears that the great hopes so many conservatives and other American patriots had in your tenure on the Court have been dashed as you fail to apply the Constitution to the case...or even disallow the case to come forward for the Court to hear it.

Is your courage failing at the testing point? Please, do your job with integrity and courage – for the Republic’s sake.

“He who loses wealth, loses much.  He who loses a friend loses more.  But he that loses his courage loses all.”  (Cervantes)

Justice Gorsuch, you have already had several chances to stand strong for the historic ideals of fairness, morality, and the social impact that are expressed clearly in the Constitution. But alas, you have faltered in many of those moments.

Please for the sake of the Republic, show courage (the kind of moral and intellectual courage shown by Justices Thomas and Alito) and vote to help heal the nation from its far-left enemies.

“You will never do anything in this world without courage. It is the greatest gift of the mind – next to honor.” (T.S. Eliot)

Oh, what hopes moral conservatives had for your tenure on the Court! And how harshly have those hopes been dashed as time and again you have failed to allow the Constitution to plainly speak to cases. Indeed, with great frequency you vote to disallow the case from even coming to the Court for review!

Chief Justice, please stop serving the cause of the “cool kids” of the left and start serving the Republic with courage…and honor.

By the way, a few more details about last night's quarterly letter-writing party are posted here and here.
Posted by DH at 11:59 AM