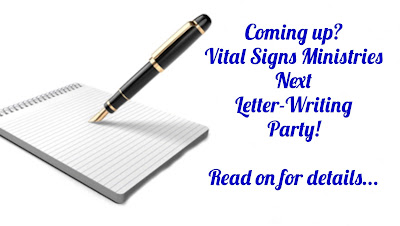 On the proposed list for next Monday evening’s quarterly letter-writing party:

* Letters of advocacy to Nebraska state senators regarding key legislation coming before them. Examples? LB 276 which would allow the immoral and highly dangerous practice of “telemedicine abortion” and proposed “health education standards” from the Nebraska Department of Education would teach school children politicized, age-inappropriate information and ideas about sex, abortion, sexual orientation, and gender identity from kindergarten on!

* Letters and notes to President Biden regarding the dastardly pro-abortion actions he has taken since moving into the Oval Office.

* Letters to our U.S Senators regarding President Biden’s Cabinet selections (like Xavier Becerra who has established an alarming track record promoting abortion and advancing a radical sexual ideology) and regarding critical life and faith legislation like the Born Alive Children’s Protection Act.

* Using the Voice of the Martyrs website, we will be writing cards of encouragement to Christians imprisoned for their faith in countries like Communist China, Vietnam, and Iran.

* The Vital Signs letter-writing parties go from 7:00 until 8:30 with everything supplied: letter targets, address sheets, stationary and cards, stamps, pens, cookies, coffee and other drinks.  You’ll enjoy the fellowship as well as the spiritual comfort of engaging in a job well done alongside other light-shining believers.  Come join us, won’t you?