June Closes with Lots of Letters 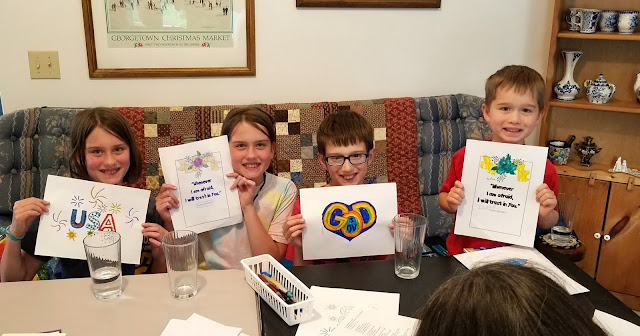 Last night's letter-writing party (an advocacy/fellowship/prayer ministry that Vital Signs Ministries hosts every quarter) was a very encouraging outreach with 17 participants, 73 cards and letters written, and 28 colorful art pages done by the four kids in attendance.

Our letters went to an a lot of people. For instance, many of us wrote to President Trump (and the First Lady), Vice-President Pence, Attorney General Barr, other cabinet members, Senators, and a good array of more local politicians. Still other letters were addressed to business leaders, heads of organizations, diplomats, and even a local body of mini-tyrants from a park who had a 63-year old blind woman banned from the premises for 2 years because she was talking to people about her faith in Jesus Christ. 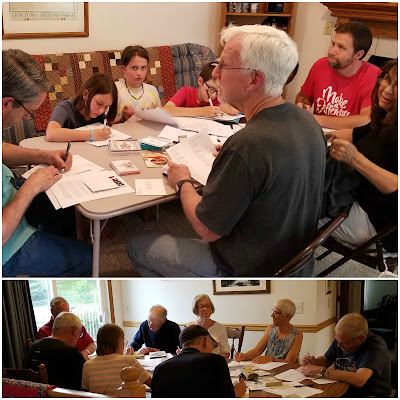 And the topics covered? Oh, my; here's just a few: voter fraud; the Supreme Court making laws (and really bad ones, at that) instead of applying the Constitution; the desperate need to break the monopolistic powers of Big Tech and the education establishment which are destroying freedom of speech; the ongoing violence perpetrated by Planned Parenthood; Democrats blocking critical legislation like the police reform bill and the Born-Alive Abortion Survivors Protection Act; Israel pulling the plug on a new Christian-run TV channel; and the Disney corporation's latest forays into the promotion of sexual confusion and perversion.

There were a lot of thank you cards and letters sent too. There always are at these parties. Thus, there were “shout outs” to South Dakota Governor Kristi Noem; Franklin Graham, Tim Tebow, Joni-Eareckson Tada, Clarence Thomas, and Dr. Lazarus Chakwera, the new President of Malawi who is a principled believer in Christ.

And the kids' artwork? Well, some will go to the police officers and firefighters in our neighborhood while others will go to residents of senior living facilities.

In the days ahead, I will share a few of the letters sent as a stimulant for you to write a few of your own.