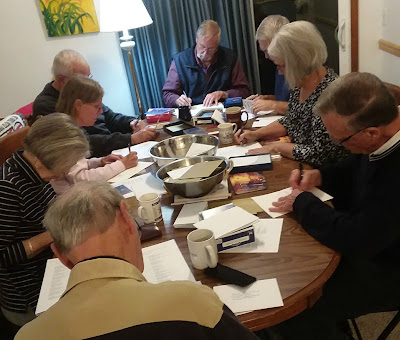 It was quite a night. In fact, it was one of the most successful letter-writing parties Vital Signs Ministries has ever hosted.  It was also an unusual event, not only because it was the Christmas card edition of the year’s quarterly letter-writing parties, but also because we had some special projects, special guests, and special materials for use.

Of course, there were the same hallmarks of every such event; namely, the prayerful effort to use the time-proven method of personal letters to make an impact for the cause of Christ and to do so amid the encouraging, helpful fellowship of other believers.  But, in our Christmas card edition of the last few years, we have started a tradition of including in our “letter targets” U.S. military veterans and Christians who are imprisoned for their faith. Let me tell you a bit about how things went.

By the time our doorbell rang announcing the first of what would eventually be 14 guests, we were ready.  The house was cleaned.  Extra tables and chairs were in place.  The coffee and tea and cookies were on the kitchen counter.  Furthermore, we had prepared the letter targets for the evening with all the necessary addresses, set out all the writing materials (including 2 dozen boxes of Christian-themed Christmas cards), and, because we knew Matt was bringing his young daughters, we even had some Christmas-themed coloring books on hand. And I know those recipients will feel themselves doubly blessed who will find inside their Christmas cards a wonderfully hand-colored piece of art from a conscientious, caring kid. It turned out that the girls went one better by also decorating other cards with colored drawings of stars, American flags, and candy canes to adorn their Christmas greetings. Way to go, girls!

By the end of the party, the group had written 149 Christmas cards to American servicemen and women who are currently deployed in freedom’s cause. And, thanks to “Operation Christmas Cards For Our Troops” (an outreach created by United Soldiers and Sailors of America), and because we have already sent to the USASOA the whole package of cards by Priority Mail (December 1 being their deadline), the organization promises they will reach their destinations before Christmas. That’s terrific. 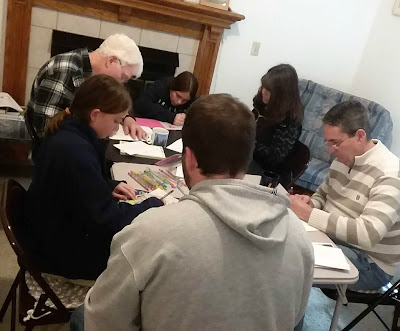 But that’s not all. The second special group for our Christmas cards Tuesday
night were the 15 Christians listed on the Voice of the Martyrs website – devoted saints who are imprisoned for their faith in Jesus Christ in places like China, Eritrea, and Iran. As I have done for several other Vital Signs letter-writing parties, I had used the VOM website to compose 45 personal letters to go inside Christmas cards – letters that, remarkably enough, are written both in English and the prisoner’s own language! So it is that each Christian from the VOM list receives from our group 3 Christmas cards each. They are beautiful cards with Christian illustrations that are themselves a dramatic contrast to the bleak, dispiriting atmosphere of a third-world prison. More important, in each of those 3 cards, there are different Bible verses and personal greetings to thank them for their steadfast courage and to encourage them to persevere. So Lord, please let every Christmas card, every Scripture, every word of solidarity and hope that we mailed out bring abounding blessings to those who receive them.

And, finally, in addition to the Christmas cards described above, we wrote out another 84 cards directed to political officials, business leaders, media personalities, and Christian heroes. The messages therein concerned the issues Vital Signs Ministries and our friends most care about: the sanctity of human life, religious freedom, promotion of biblical marriage, etc.

Now, the messages in all of those cards included Christmas greetings and promises of our prayers in their behalf, but there were additional messages that, as you can easily guess, depend on the particular recipient. For instance, the sentiments expressed in the Christmas cards that went out to Joni Eareckson Tada, Franklin Graham, the Assure Women’s Resource Center, or President Trump are going to be quite different than the ones sent to such leftist and pro-abortion groups as the Girl Scouts of America, Planned Parenthood, or the Democrat Party. Yet even in the notes to our enemies, we remain precise and polite…even winsome. 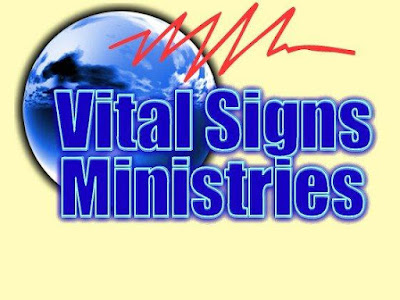 Of these 84 Christmas cards, the majority were sent to the President and members of his cabinet – President Trump 9, Vice-President Pence 8, Attorney General Barr 6, and so on. But there were a lot of others who will have at least one Christmas card coming their way from our Tuesday night efforts. They include: Nebraska’s Senators and the 2nd District’s Congressman; Governor Ricketts and Lt. Governor Foley; Omaha Mayor Stothert; pro-life and pro-family businesses like Scheels and Hobby Lobby; outspoken advocates for biblical values like NFL standout Demario Davis; and then several others who we believe deserve our thanks and encouragement. In that group (besides those mentioned above) were Tony & Lois Evans, Randy and Nanci Alcorn and their team with Eternal Perspective Ministries, Rush Limbaugh, Nebraska Family Alliance, Kanye West, Tim Tebow, the team at Joni & Friends, and Back to the Bible’s Harold Berry.

It was a really superb evening of truth-telling, light-bearing ministry alongside other dedicated Christian activists. And we were all very pleased, of course, to learn that we had set a new record for a Vital Signs Ministries letter-writing night. Indeed, using just our regular time of 90 minutes or so, the 16 of us turned out those 45 Christmas cards to our imprisoned brethren, the 149 to men and women serving our nation in the military, and the 84 to people in the categories I’ve mentioned.  That’s a total of 278 Christmas cards…plus the bonus of a few pages from coloring books!

Don’t you think it’s time for you that start doing some letter writing of your own?  Or, better still, perhaps you should consider organizing a party like ours for your friends, family, fellow church members, and so on.  Just give us a ring and we’ll be delighted to help you get started.
Posted by DH at 4:38 PM